Goethe Pop Up Kansas City welcomes Pierre Jarawan from Germany. He reads from his debut novel Am Ende bleiben die Zedern which was recently translated into The Storyeller, published by World Editions.

The Storyteller / Am Ende bleiben die Zedern
Samir's parents fled Lebanon to Germany shortly before his birth. When his beloved father disappears without a trace, Samir is eight. Now, twenty years later, he sets off for the land of the cedars to solve the mystery of this disappearance. A family story, touching, surprising and masterfully interwoven with the fate of the Middle East. 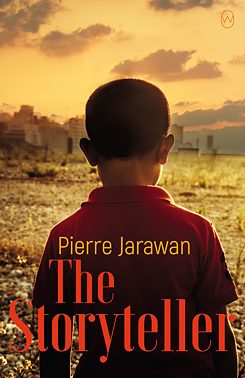 © Marvin Rupert Pierre Jarawan is an author, slam poet, stage writer, organizer and presenter from Munich. He was born in 1985 as the son of a Lebanese father and a German mother in Amman, Jordan, after his parents had left Lebanon because of the civil war. Since 2009 he has been one of the most successful stage poets in the German-speaking world. His debut novel Am Ende bleiben die Zedern was published in 2016 by Berlin Verlag. The book was on the SPIEGEL bestseller list. Pierre Jarawan lives in Munich. He is currently working on his second novel.

“His masterful debut successfully interweaves historical events and a suspense-filled investigation of one family’s fate into a novel that deeply moves its readers.” — New Books in German

BOOKS FIRST is a new program of the Goethe-Institut to promote contemporary German-language literature in the English-speaking world. A special translation grant and numerous events invite you to discover new literary voices