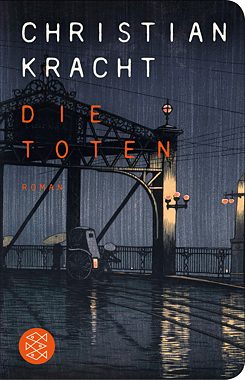 © Fischer Verlage; Courtesy of Fischer Verlage Read and discuss works by contemporary German authors in this new series. All books can be read in their recent English translations or in the original German; our discussion will be in English. Coordinated by Chris Walker together with Goethe Pop Up Kansas City, the Goethe Book Club focuses on contemporary fiction and will explore experiences and thoughts about the text.

All our selections can be obtained online via most major vendors in hard copy or digital format and at The Raven Book Store. You can also borrow a hard copy from the Pop Up Library where we hold two copies of each book in German and in English.

The Dead / Die Toten by Christian Kracht
In Berlin, Germany, during the early 1930s, the acclaimed Swiss film director Emil Nägeli receives the assignment of a lifetime: travel to Japan and make a film to establish the dominance of Adolf Hitler’s Nazi empire once and for all.  But his handlers are unaware that Nägeli has colluded with the Jewish film critics to pursue an alternative objective – to create a monumental, modernist, allegorical spectacle to warn the world of the horror to come.

Meanwhile, in Japan, the film minister Masahiko Amakasu intends to counter Hollywood’s growing influence and usher in a new golden age of Japanese cinema by exploiting his Swiss visitor. The arrival of Nägeli’s film-star fiancée and a strangely thuggish, pistol-packing Charlie Chaplin—as well as the first stirrings of the winds of war—soon complicates both Amakasu’s and Nägeli’s plans, forcing them to face their demons . . . and their doom.

“The Dead is the beautiful, brilliant, and utterly mad novel that Thomas Mann would have written had he known the East like Yukio Mishima and loved his adopted Hollywood with the gusto of Nathanael West”.
— Joshua Cohen

Christian Kracht is a Swiss novelist whose books have been translated into thirty languages. His novel The Dead was the recipient of the Hermann Hesse literature prize and the Swiss Book Prize. Kracht is married to the German film director Frauke Finsterwalder. They live in Los Angeles, California.