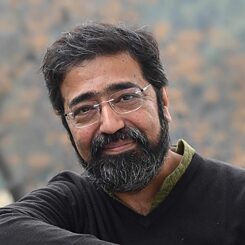 © Amar Kanwar If every moment contains the possibility of being alive and being dead, could an acute awareness of every moment then also create an acute consciousness of living and dying?

This moment of the virus does exactly that. An unknown invisible killer who may or may not kill makes us suddenly become acutely aware of being alive, of the possibility of living and the possibility of dying. The enforced lockdowns have prevented fleeting random anxiety and instead made it possible to remain, for a slightly longer time, in such a state of acute awareness.

The fear of death is perhaps one of the oldest fears ever. The search for an antidote, permanent or even temporary, is also one the oldest pursuits. Sometimes there is success and death is delayed, though usually a successful antidote is to forget that we are mortal. If you forget, then the fear tends to disappear. Hope also works quite well. If we hope with great intensity and consistency, fear can slip away. Sometimes people pray regularly, or perform deliberate actions to accumulate good karma, some hide themselves, some begin to eat very little and so on. Others perform actions that heighten a self-perception of invincibility. The greater this perception, the stronger the delusion and the easier it becomes to forget the fear of death. But this virus has suddenly messed up all these strategies. It can fly business class, spread in the ghetto and be sitting on your delivery package outside your door, waiting patiently.

One good old way to deal with ‘natural’ death has always been to gracefully accept it and to let this embrace overcome fear. The old and weak will eventually give way to the stronger and younger. This surrender releases anxiety, makes one grateful to be alive and magically gives greater meaning to all actions thereafter. However, it’s not as simple when dealing with the question of unnatural death or murder. Let us not begin to count the massacres of bird, animal and insect species so far. Instead let us stay within the human zone for a while. It can become difficult to understand how to respond to – for instance – the fact that in India, the number of reported fatalities due to road accidents in one year is about one hundred and fifty thousand people. Yet there is no national emergency response of a total lockdown of road travel. It is also hard to understand that in the last decade, we have had roughly 200,000 suicides by farmers. Unofficial figures are perhaps a lot more. But still, two hundred thousand or more farmers have killed themselves in India. The scale and meaning of this is hard to comprehend. Nations have gone to war with each other for a tenth of this number killed, but we haven’t managed to stop this helpless ‘voluntary’ mass murder. There has been no emergency national lockdown. No ban on all predatory and toxic chemical big agro seed, fertilizer, pesticide corporations, no lamps being lit, no balcony concerts, no two-minute silence in the parliament either. No drastic reduction in weapons and ammunition expenditure, no dramatic sweeping measures toward improving the public health system for the poor or increasing the nutrition and immunity status of all.

It seems you cannot argue with human arrogance. Evidence, facts, data or trends of destruction or discrimination on the earth also make no significant difference. Even an emotional appeal about the suffering of ecosystems and communities doesn’t matter much. Some cynically say that the default position of the insecure human is arrogance and thus we are all condemned to live (or die) with it. Others wisely say that narcissists can only cure themselves of their narcissism, so the only path ahead is to cleanse one’s inner self. Priests whisper, this is the will of God, atone and ask for mercy. Fascists seize the opportunity and say fear is the ideal terrain over which to maximize surveillance, control and power. They may also say that this is the ideal moment for the final push, to exterminate the enemy, the unwanted and the despised. Technocrats demand the next possible breakthrough so as to dramatically cut through the nonsense and fix the problem with a vaccine. Philanthropists say it should hopefully be free of cost. The oracle indicates that the next virus will be radiation – equally sudden but far more deadly.

The idealists may say – this is the moment to be deeply aware of the interdependence of all beings, of the frailty of life and the inevitability of death. They may also demand a complete ceasefire – a call to halt all forms of war, violence and ecologically destructive practices. They may call for a mass awareness in all educational institutions, for a civil disobedience across the planet – not against any particular individual, political party or government but against greed, overconsumption and the logic of the self-destructive, endless profit multiplication of economic systems. They may issue a call for policies that destroy all patriarchal and discriminatory power structures. They may even strike against themselves; against their own top schools and screwed-up value systems and call for more equitable distribution of wealth, of resources and a dramatic change in public policies. And, yes, even a halt to the weapons industry and the bomb making-selling game. They may also call to reclaim the wisdom of the commons, and if no one listens, they may step out and look for local solidarities, make small alliances and change the way they relate to every bird, animal, child, man and woman that they meet. If that is also not possible, then they are likely to hold the feeling close to their heart and step out of the race when they can.

It is hard to live quietly in isolation. I also do not want to die alone, quarantined in a hospital. To read about the pain of so many people, about dying alone and not being able to meet family or friends in the last few days of life has destroyed all sense of comfort and certainty. Every day, my mind races away into the homes of those who are unsafe or hungry or ill or imprisoned. Strangely, for a few days, we are interconnected across many borders and able to imagine and feel the pain of others. If this is a moment of a global pandemic, it may also be one of coming together and being equal parts of a unified life system.

Amar Kanwar is an artist and filmmaker based out of New Delhi. He is known for making films and creating arts projects that are complex, contemporary narratives connecting intimate personal spheres of existence to larger social political processes. Finding diverse audiences, Kanwar's work has been a vast journey of exploration of our relationship with the politics of power, violence, sexuality, ecology and justice.