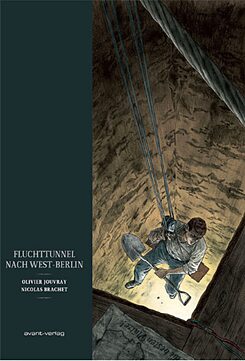 © Avant-Verlag A true story of the so-called 'Tunnel 57'. Three years after the Berlin Wall was built, art student Tobias made the daring decision to dig a tunnel from west to east. With the help of friends and volunteers, the risky plan was put into practice. Accompanied by the constant fear of being discovered, he and his helpers, in strictest secrecy, dug a duct to lead their relatives to freedom. On 3 and 4 October 1964, 57 people could flee through the 145 m long tunnel.

Olivier Jouvray (* 1970, France) studied culture and communication in Lyon. With his brother Jerome, he founded the KCS1 studio. Nowadays he runs comic courses at the renowned art university Émile-Cohl in Lyon.

Nicolas Brachet (* 1976, France) lives in Lyon. He worked as an engineer before making a name for himself as a comic artist in 2007.