Concert The Poetry of the Moon

The Ancient Music Group of Tonkin

“A Walk in a Spring Landscape” brings together young composers from Viet Nam, Phillipines and Hong Kong with Arnold Schoenberg’s “Transfigured Night” - a landmark 1899 tone poem that was the first piece to confront the “it’s complicated” aspect about relationships between men and women. The first half of the concert features ”Jiji” with the stunning multimedia fusion of Viet Nam’s young visionary Luong Hue Trinh, “Hum Phenomenon“ by the rising light of Hong Kong’s Tonia Ko and “Bardo” reflections on a Chinese landscape painting from Feliz Anne Reyes Macahis of the Phillipines, who has a chamber opera being premiered at the Deutsche Oper in Berlin the same week as this concert with the Hanoi New Music Ensemble.

Foto: Luong Hue Trinh (* 1985, Hai Duong) is multimedia composer and electroacoustic music performer. She graduated with honors in Jazz Keyboard (BA) at the Vietnam National Academy of Music. Since 2010 she has worked in electroacoustic music, which has become her main musical focus today. From 2015-18, she was awarded a DAAD (German Academic Exchange Service) scholarship for the program “New Technique in Composition” and finished her Master in Multimedia Composition under the guidance of Georg Hajdu and Elmar Lampson at the Hochschule für Musik & Theater Hamburg, Germany.

© Tonia Ko Tonia Ko’s creative evolution is largely guided by three conceptual pillars: texture, physical movement, and the relationship between melody and memory. These ideas permeate her recent works across a variety of media—from instrumental solos and large ensemble pieces, to paintings and sound installations. No matter how traditional or experimental the medium, Ko's work reveals a core that is at once whimsical, questioning, and lyrical.

Recipient of a 2018 Guggenheim Fellowship, Ko’s music has been lauded by The New York Times for its “captivating” details and “vivid orchestral palette.” She has been commissioned by leading soloists and ensembles, and performed at venues such as Walt Disney Concert Hall, Carnegie Hall, Kennedy Center, and the Tanglewood Music Center, Aspen Music Festival, and the Santa Fe Chamber Music Festival. Internationally, her work has been featured at the Royaumont Académie Voix Nouvelles, Shanghai Conservatory New Music Week, Young Composers Meeting at Apeldoorn, and Thailand International Composition Festival, where she was awarded the 2014 Rapee Sagarik Prize. Ko has received grants and awards from the Harvard University's Fromm Music Foundation, Chamber Music America, the American Academy of Arts and Letters, Broadcast Music, Inc. (BMI) as well as residencies at the MacDowell Colony, Copland House, Kimmel Harding Nelson Center, and Djerassi Resident Artist Program. She served as the 2015-2017 Composer-in-Residence for Young Concert Artists.

Ko was born in Hong Kong in 1988 and raised in Honolulu, Hawaii. She earned a B.M. with Highest Distinction from the Eastman School of Music and an M.M. from Indiana University Jacobs School of Music. At IU, she served as Associate Instructor of Music Theory and was awarded the Georgina Joshi Commission Prize. She holds a D.M.A. from Cornell University, where she studied with Steven Stucky and Kevin Ernste. Currently, she is the 2018-19 Postdoctoral Researcher at the University of Chicago’ s Center for Contemporary Composition.
Feliz Anne Reyes Macahis (Manila) 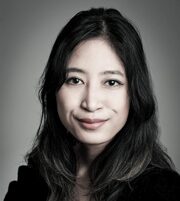 © Feliz Anne Reyes Macahis is a composer and singer from Manila, Philippines by way of Montréal and Memphis.
Ms. Macahis’ music, woven with a steady hand from fine glass thread, speaks passionately through an intricate world of vocal, instrumental, and electronic resources.

It speaks of furtive passages through the night, of the faint outlines of a room whispering into focus as you open your eyes in the morning, scattered embers of fugue dreams in the last few moments before waking.

It sings the quiet bells of an uncertain memory, their wan echoes ringing out in the distance; of lines in a language you used to know whispered into your ear by a voice you think you recognize.

It tells of wandering drunkenly home through a nameless town at some unknowable hour of the night, alone save for the blurred melancholy of the street lamps, your eyes lifted to the constellations that reach soundlessly down through the evening; of lying in a vast, vacant field, dreaming of water and copper, the whole universe in your hand and the stars like a thousand little bells.
Jeff von der Schmidt
(*1955, Los Angeles, USA) founding Artistic Director of Southwest Chamber Music and the Los Angeles International New Music Festival. He received two Grammy Awards in 2003 and 2004 and a total of nine nominations for 30 compact disc recordings. Mr. von der Schmidt has conducted concerts nationally and internationally in Europe, Asia, USA and Mexico. He serves as conductor and Artistic Advisor to the Hanoi New Music Ensemble.

Arnold Schoenberg
(13 September 1874 – 13 July 1951) was an Austrian, and later American, composer, music theorist, teacher, writer, and painter. He was associated with the expressionist movement in German poetry and art, and leader of the Second Viennese School. With the rise of the Nazi Party, Schoenberg's works were labeled degenerate music, because they were modernist and atonal. He immigrated to the United States in 1934.

Schoenberg's approach, both in terms of harmony and development, has been one of the most influential of 20th-century musical thought. Many European and American composers from at least three generations have consciously extended his thinking, whereas others have passionately reacted against it.

Schoenberg was known early in his career for simultaneously extending the traditionally opposed German Romantic styles of Brahms and Wagner. Later, his name would come to personify innovations in atonality (although Schoenberg himself detested that term) that would become the most polemical feature of 20th-century art music. In the 1920s, Schoenberg developed the twelve-tone technique, an influential compositional method of manipulating an ordered series of all twelve notes in the chromatic scale. He also coined the term developing variation and was the first modern composer to embrace ways of developing motifs without resorting to the dominance of a centralized melodic idea.

Schoenberg's archival legacy is collected at the Arnold Schönberg Center in Vienna.