Using the three movements of Gustav Holst’s Suite No. 1 as a recurring theme of three locations, Brass Promenade features a diverse mix of repertoire ranging from Italian baroque, Russian romanticism, to the 20th century fanfares and operas, finishing with new arrangements of contemporary works including some Vietnamese favorite melodies.

Indulging in a unique blend of experience: listening, walking, climbing the stairs, the audience will discover a new face of brass music, quite distinct from section identity associated with their role in symphony orchestras. This performance by Hanoi Brass Community will surprise through unexpected transformations and interesting interactions with spaces, explore various acoustics from a chamber room of the venerable  French villa to a rough terrace resembling a contemporary artist’s studio -  from indoors to outdoors, on the ground then up in the high-rise.

This event is part of manzi’s art programme supported by Goethe-Institut. 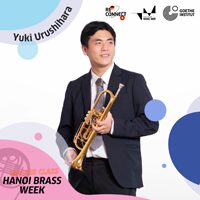 © Goethe-Institut Hanoi Yuki Urushihara was born and raised in a musical family. His father is a cellist and his mother is a violinist. He started to play the trumpet when he was 7 and the piano at the age of 12. He graduated with his Bachelor and Master Degree for trumpet performance at the HMT Rostock, Germany.

He was a member of several youth orchestras, which allowed him to experience various musical aspects and epochs. Those orchestras include Junior Philharmonic Orchestra Tokyo, Asian Youth Orchestra (Hong Kong), as well as experienced as extra with the Staatsoper Berlin, and the Orchestra Akademie at the Norddeutsche Philharmonie Rostock.

From 2018 Yuki Urushihara moved to Hanoi Vietnam, until 2021 he worked as associate principal trumpet player at the Sun symphony orchestra in Hanoi.
Hoành Phạm (1991) TRUMPET 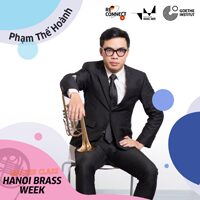 In 2018, he graduated from the Vietnam National Academy of Music and has worked at the Vietnam National Symphony Orchestra until now. Along with research and experimentation combines traditional Vietnamese culture with his trumpet. In 2018, 2019, 2020 he joined the Wonder Art Education, Practice and Research Organization run by pianist Trang Trinh, to carry out art projects towards the introduction of trumpets and traditional Vietnamese music for audiences aged 2 to 12 years old. In 2020, he collaborated with the Asia Education Foundation of the University of Melbourne to incorporate traditional music for use in the Podcast Series Building BRIDGES for World Teachers Day. In Podcast Series he plays on the online music platform Spotify 2020 is also the year he and his friends from different orchestras create Hanoi Brass Community to create a playground for brass lovers in general, including Hanoi Brass Quintet and Hanoi Brass Ensemble. 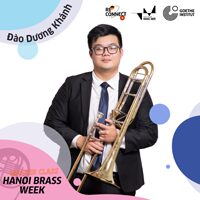 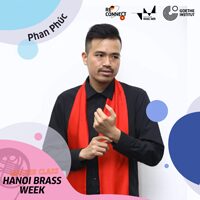 © Goethe-Institut Hanoi Phuc Phan finished his musical studies at Lake Forest College in Illinois, and has been active musician in Hanoi since 2013. He is pianist for the opera troupe and orchestra of the Vietnam National Opera and Ballet, co-runs the opera club Operaphilia in Hanoi, and is the music instructor of Alexandre Yersin international high school.