Interview
Nelisiwe Xaba makes her moves on the politics of exoticism

“I have to be a feminist; every day should be a protest day,” proclaims dancer, choreographer Nelisiwe Xaba. It’s weeks ahead of the 27th Dance Umbrella and the award-winning artist is participating in the festival’s writing workshop, patiently reviewing her almost two-decade-long dance career, while addressing the politics attached to being a black, female dancer. The theme of this year’s workshop is “choreographing gender”.

“Feminism isn’t that thing that happened in the sixties. We haven’t resolved what our grandparents fought for,” the Soweto-born dancer says. “My grandmother participated in the struggle for women in the 1960s. So for me, it’s always been something I should carry on; there’s no way that my life cannot be about protest.”

Her collaborative dance/installation piece with experimental filmmaker Mocke J van Veuren, titled Angels and Uncles, which critiqued virginity testing, won the FNB Art Prize in 2013. Xaba’s activism is embedded in her art, yet it is not didactic. “As a feminist, I disagree (with virginity testing) but it’s important to spark the conversation. It’s also not good to tell people who are practising a tradition that it is wrong. I think that shows arrogance.”

Xaba, who honed her craft at the Johannesburg Dance Foundation and the Rambert School of Ballet and Contemporary Dance in London, is not new to gender activism. From They Look at Me and That’s All They Think, a collaborative project with contemporary design studio Strangelove about Sarah Baartman, the Khoi woman in the 19th century who was pejoratively known as the Hottentot Venus and who was displayed in colonialist “human zoos”, to Correspondences, her collaborative work with Haitian choreographer Kettly Noël, Xaba’s work reads like the journal of a brown-skinned woman who has travelled around the world exhibiting her art on the walls of her body.

“I don’t have an interest to put on my status that I’m an activist. I just am,” says Xaba ahead of the performance of her work Fremde Tänze (Strange Dances). Created while Xaba was participating in a residency in Freiburg, near the Black Forest in southern Germany last year, it was inspired by her research on German choreographers who were inspired by notions of exoticism. In this work Xaba addresses exoticism and the gaze – a recurring topic for her.

“I’ve accepted the fact that I am (seen as) a queen of exoticism and the exotic,” she says. “(My body is) political. But what I’m interested in is the gaze and its angle. The angle that you view or gaze from is the point that it becomes political,” she says.

Xaba’s description of being exoticised as a black woman in the contemporary dance field and society is rooted in a history that can be traced from the 19th century, with the eroticisation and representation of Baartman, to the work of African-American dancer and actress Josephine Baker – who was celebrated as “the Black Pearl” or “the Bronze Venus” – in early 20th-century France.

Beauty – But it’s Not Glossy

Centuries later, a similar gaze, especially on women, is perpetuated in popular culture, from commercial music videos to high-fashion magazine spreads. Xaba’s Fremde Tänze is not the only piece at the Dance Umbrella to engage with this type of othering and representation.

Wena Mamela, choreographed by celebrated performer Mamela Nyamza, reflects on her life as a black South African woman and the traditional roles assigned to women in dance and society. 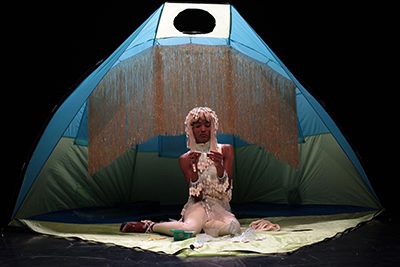 Nelisiwe Xaba performs Fremde Tänze © John Hogg A collaborative work between Zimbabwe’s Tumbuka Dance Company and Company Nora Chipaumire will address how these issues are pertinent to men too. Portrait of myself as my father, choreographed by veteran Zimbabwe-born, New York-based Chipaumire, highlights male representation, masculinity and the black African body, and looks at issues around identity, specifically the “Zimbabwean self”.

Moving into Dance Mophatong’s Sunnyboy Motau and Tel Aviv-based Rachel Erdos have created Fight, Flight, Feathers, F***ers, which explores the politics of masculinity through the fight or flight theory.

Wrapping up the workshop, Xaba meditates on her controversial piece Sarkozy Says ‘Non’ to the Venus, which was designed to challenge the gaze in relation to contentious museum spaces in Europe, where the likes of Baartman were displayed like objects.

“There’s beauty in my work but not the kind of beauty you find in glossy magazines,” she once told City Press. “There’s no way I can create work where we are just being beautiful, dancing and just gyrating.”