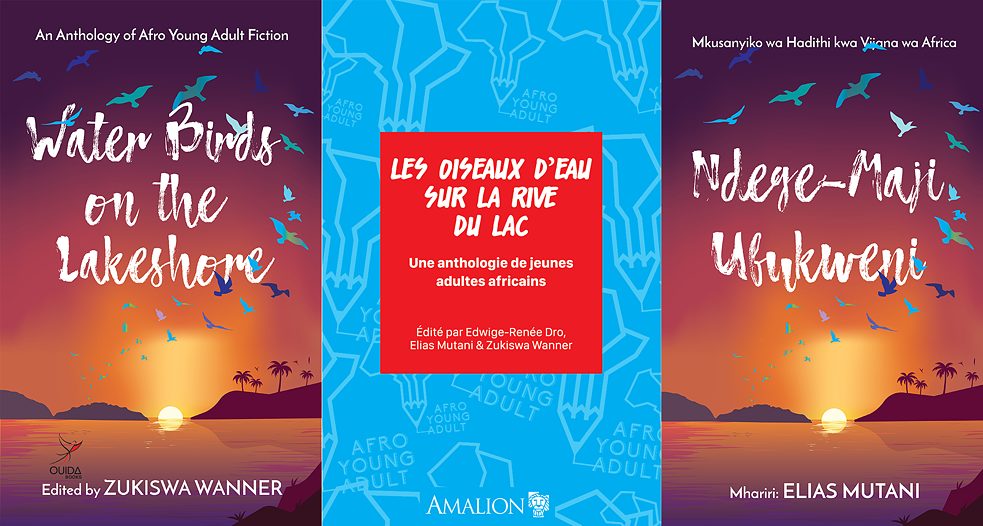 The Goethe-Institut invited aspiring African writers of all ages interested in writing for Young Adults (13 - 19 years) to submit short stories of 3000-5000 words in length in Kiswahili, English or French.

A panel of curators selected the best texts and invited the writers to participate in workshops across the continent that took place in February 2019. For a list of all participants and their stories, please check further below.

The top stories from these workshop were published in an anthology which are available in Kiswahili, English and French and were launched at Ake Festival 2019.
​
The anthology is available in selected book stores and libraries all over Africa. There will be additional release events in selected countries on the continent. For more information contact Zukiswa Wanner, Project Coordinator at afroyoungadult@gmail.com or Jonas Radunz, Public Relations Officer of the Goethe-Institut South Africa at Jonas.Radunz@goethe.de

Between September 1st 2018 through November 30th 2018 young writers from all over Africa were encouraged to send in their submissions of short stories for the Afro Young Adult initiative, whose goal it is to increase the availability for African Young Adult literature.

There were a total of 435 submissions from all over the African continent and the diaspora. Of those, our facilitators selected 52 whose stories were to be workshopped to be better for selection for our upcoming anthology. The announcement of the workshop participants was made public on the 3rd of January 2019.

“It is gratifying that the Goethe-Institut is leading in ensuring more Young Adult fiction is available on the continent through this initiative. It was further heartwarming to see the enthusiasm of so many writers across the continent, with the youngest submission coming from a 13 year old Kenyan student. Through the Afro Young Adult initiative, not only do we hope for an anthology that Young Adults across Africa will relate to and enjoy, but that this can get more people writing in this genre so that we can have as much diverse YA fiction in short and long form as we do short stories and novels for adults,” curator Zukiswa Wanner said on this occasion.

To ensure impartiality, names of participants were removed from stories before being sent to facilitators. Additionally, we largely avoided facilitators taking part in selecting stories submitted for their own workshop cities. As an example, Lagos workshop facilitator read through and selected stories for the Accra workshop while Johannesburg facilitator Mohale Mashigo selected the Nairobi workshop stories. The exceptions to this were the Dakar, Lome and Dar es Salaam workshops. In the first two, Lome facilitator Edwige Dro and Dakar facilitator Richard Ali Mutu jointly selected the ten participants for the two cities respectively. In the latter, Elias Mutani who is the Dar es Salaam facilitator selected all the Swahili participants. His impartiality and strive for the best stories can best be seen in his selection of more participants from Kenya than his own home country, Tanzania.

Time to Workshop this

The eight workshops took place in eight African cities from February 11th to 15th 2019 (except for Lagos which occured 4-8 February due to elections) and consisted of the following participants:

On the 1st of March 2019 the Goethe-Institut Sub-Sahara Africa was pleased to announce its final selection for the Afro Young Adult project. The stories were selected by panels consisting of writers, literary activists and, most importantly, Young Adult readers from across the continent. The 17 selected stories, written in English, French and Kiswahili, were then to be published in an anthology later the same year.

Zukiswa Wanner, the project coordinator, had this to say about the process: ’When we conceived the idea and did the callout for the YA initiative, we expected that we would get 10 to 12 good short stories to put in an anthology for our 13-19 year old readers who are an often-ignored demography in our literature. With the help of the Young Adults who were part of our judging teams, we were now able to get 17 brilliant stories, much more than we had bargained for. These stories from the world’s oldest continent with the youngest population range from the fantastical of what another Africa could be like to observations of youth in war situations and the mysteries of deaths to personal questions about family, friendships and sexuality. Despite the wide ranging topics, what all these stories have in common is that they are written in teenage voices - familiar to anyone who has ever been (or is) one. Voices that are at times assertive, sometimes uncertain but always aware of a world around them. ‘

The final 17 writers and their stories to be included into the anthology were:

The Goethe-Institut was proud to present the release of the long-awaited Afro Young Adult anthology, titled 'Water Birds on the Lake Shore: An Anthology of African Young-Adult Fiction' which was launched at the Ake Festival on the 24th of October 2019.

Zukiswa Wanner, the project coordinator, points out: “The Goethe-Institut Sub-Saharan Africa has been at the forefront of the Afro Young Adult initiative. This anthology is the first of its kind in recent memory on a continent where the majority of the population are young adults and yet are too often ignored. Despite the unforeseen costs that came up in the process, they did not give up on it, and in this way, exemplified how developmental partners can work together with the African continent in literature.”

The stories in the anthology range from the fantastical to observations of youth in war situations and the mysteries of death; to personal questions about family, friendships and sexuality. Despite the wide ranging topics, what all these stories have in common is that they are written in young adults’ voices - familiar to anyone who has ever been (or is) at the start of adult life. Voices that are at times assertive, sometimes uncertain but always aware of a world around them. Asma Diakité, Regional Head of Cultural Programmes at the Goethe-Institut concludes: “The stories in the anthology shine a light on the issues that young Africans are concerned with - the importance of these voices from the continent with the world’s youngest population cannot be underestimated. We are hopeful that the anthology will be widely distributed in book shops, libraries and class rooms all over the world, but particularly on the African continent so that young adults in Africa can see that they are not alone with their hopes, fears and dreams.”

AYA authors on other platforms

Shamin Chibba speaks about the desolate state of elder care in South Africa.

Precious Colette Kemigisha: Changing the ‘African’ Attitude to Pets During the COVID-19 Lockdown