This project initiated by the Goethe-Institut Johannesburg aimed for participants from different African countries and Germany to face their common history. Here is what three participants experienced on their journey.

Visiting the African quarter in Wedding, going to see an exhibition in the German History Museum (Deutsches Historisches Museum/DHM), meeting Afro-German activists, art historians and curators, this group of people that explored Berlin last autumn certainly was not the usual tourist group you are used to seeing swarming around places of interest. The participants had been invited to the German capital by the Goethe-Institut to look into a neglected period of history: Germany’s colonial past. This part of history has not been paid much attention to in this country for a long time and has only recently begun to emerge within the discourses of former colonies. In fact, a lively debate around a shared history has only been going on for a few of years now. The topic is mainly being discussed in fields related to arts which are currently exploring different kinds of dealing with one’s past in media, museums and universities.

The discussion includes a number of rather different perspectives. The journey organized by the Goethe-Institut showed to what extent historical and personal experiences shape one’s perception of the past: There is the director of the Goethe-Institut Windhoek who is currently experiencing new ways of dealing with Namibia’s colonial past. There is the visiting curator from Tansania expressing her very own thoughts on the work at the DHM. And there is the South-African artist and her connection with decolonisation activists in Germany. 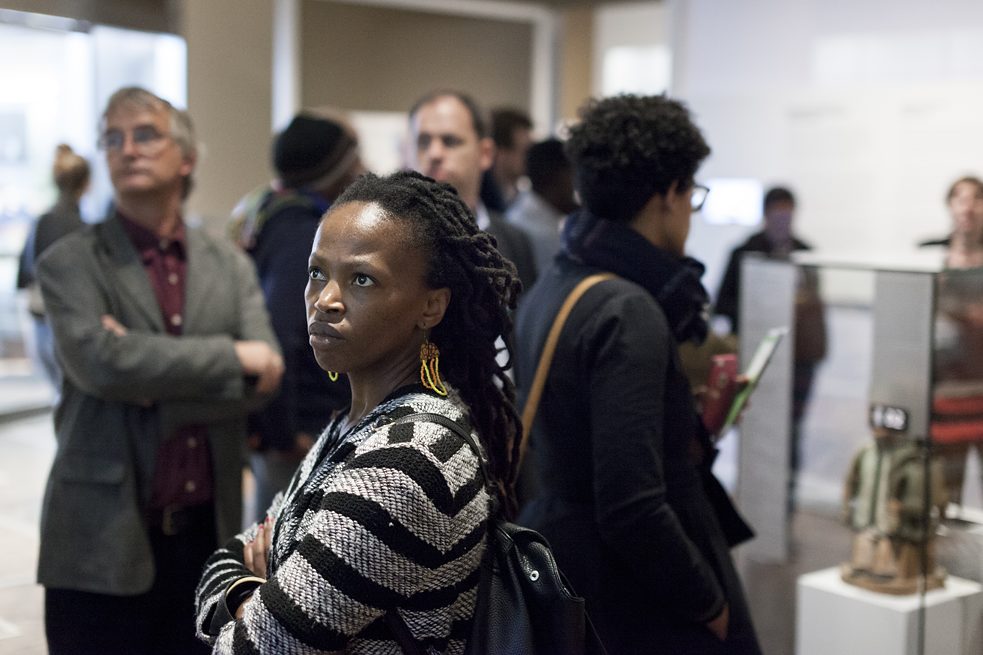 © Marcel Runge Daniel Stoevesandt had been appointed director of the Goethe-Institut in Windhoek a year ago, just before negotiations between the governments of Germany and Namibia have been resumed. While the topic is being paid attention to by international press and German artists alike, Namibia does not seem eager to discuss its own colonial past in the public. “Over here, the South African Border War is still the most important narrative”, says Stoevesandt. “Many politicians holding office today have witnessed this war, which is why people are more involved with this particular period of time while the memories of German colonization have become blurred. It is only now that that a debate about this particular period of history is beginning to emerge: “Many streets and even districts have been re-named during the last couple of years”, says Stoevesandt. Thus, Kaiser-Wilhelm-Straße has been turned into Independent Avenue, and the district Lüderitz is now called ǃNamiǂNûs.

Meanwhile, Berlin is putting the topic up for debate in a museum. The German History Museum (DHM) opened a huge exhibition depicting its colonial past last autumn which has caused a lot of controversy ever since. Among the items on display were the signed agreements of the Berlin Conference as well as a number of objects aimed at illustrating the relations between Germany and its colonies. “In my opinion, the DHM should have focused more on the Herero and Nama genocide”, says South-African artist Greer Valley. She feels that a more critical historical view of what was the most horrific colonial crime committed by Germany as well as more in-depth references of European colonial history would have been appropriate. Stoevesandt agrees that the presentation of various exhibits would have been met with even more controversy had the exhibition not been planned years ahead. “The debate around the subject of decolonisation has really begun to spark 1 ½ years ago”, he explains and adds that the topic is currently being dealt with on a broad level. Furthermore, Berlin too is considering renaming streets and erecting points of remembrance of colonial crimes in public city spaces. The discussion includes the questions of how to deal with looted art and whether the newly built city palace and its art collection in the Humboldt Forum displays an inappropriate stately behaviour. 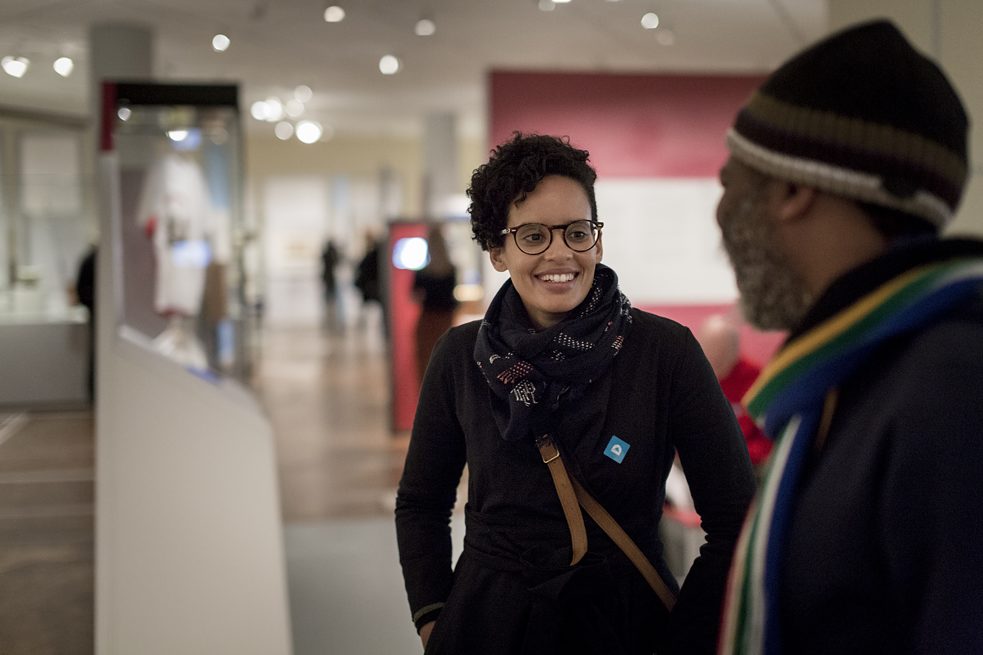 © Marcel Runge “I have to admit”, Stoevesandt continues, “that in my opinion the rather emotional approach of some of the Humboldt objectors does not facilitate the debate”. Greer Valley does not share his view: “I strongly support the radical protests by initiatives such as No Humboldt 21 aiming to closely watch and control decision-makers in politics and culture”, she says. Valley considers herself part of the current protest movements being organized in South-African universities. In her opinion there is a connection between the efforts of decolonization taking place here and the current activism in Germany. “I believe that issues such as looted art or power structure between German and African curators will certainly be discussed by the Humboldt Forum. However, it remains to be seen whether all those different perspectives connected with this topic will be taken into account at the end of the day.”

Flower Manase, curator from Tanzania, also adopts a critical attitude when it comes to the collection to be shown in the Humboldt Forum. “How can we speak of a Shared Heritage when this shared cultural heritage has in fact been illegally obtained?”, she asks. It is because of these differing perspectives that Manase promotes an open exchange of views between German and African curators. Manase has been one of the curators the DHM had turned to in order to help prepare the exhibition on colonialism. “I felt I had been actively involved in the project, and the German curators really made me feel welcome”, she says. However, she believes that she and her fellow worker from Namibia had been asked to join the exhibition at a point of time at which they could not really make an impact any more: “If we want to show exhibitions and collections that allow for an African perspective, too, then we clearly have to work more closely with each other.” 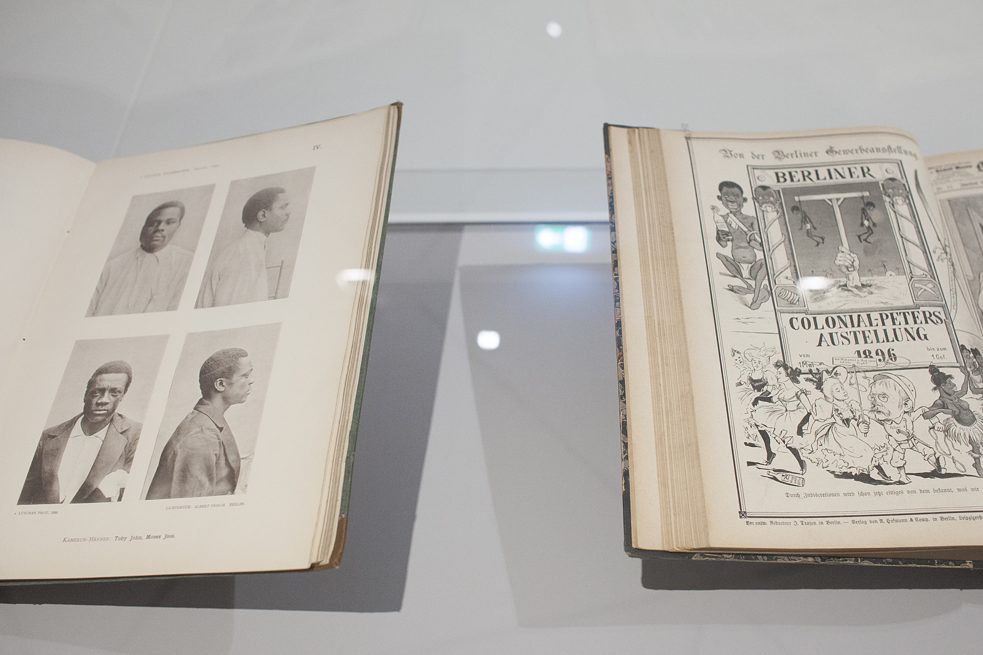 © Marcel Runge Some participants felt that an exchange of opinion with other African countries seems to be of importance, too. “Talking to Beatrix Munyama has been my most defining experience on this journey”, says Greer Valley. It was only by meeting the dancer that she learned about the so-called GDR children of Namibia. Munyama had been working on a dance performance focused on the fate of those children who had been sent to the former Eastern territories of Germany by SWAPO in the late 1970s and was therefore able to give Valley and a number of other participants deep insight into a piece of German-African history that most people had been unaware of. “At school, everyone is looking at their own colonial past and independent movement”, says Valley, “so you hardly get to learn anything about the history of other countries.”


In Tanzania, Flower Manase explains, the colonial past is kept alive through oral culture and school education, whereas according to Greer Valley, South Africa keeps the debate going by a shift of content to be observed at universities. Things look different in West-African countries, though, Valley says: “Our colleagues from Cameroon did not seem to have a problem to see objects of art taken from their culture on display in German museums – they even believed these items were in better hands here than in Africa, a point of view that I strongly object to.”


Encouraging a lively debate and considering all those widely differing views expressed thus seems crucial in order to establish an attitude that is acceptable for everyone involved in the project, especially given the fact that the Humboldt Forum will demonstrate its demand for global exchange upon opening the exhibition. For these efforts to succeed, an inter-African dialogue will be just as important as a close collaboration with Germany.