In Amazonia, the Apurinã view their palm trees, which are treated as their ancestors, as being directly connected to the rains. | Photo (detail): © Pirjo Kristiina Virtanen

Investors and trade agreements play a significant role in dictating what people  produce, cultivate, extract, manufacture and, on the other hand, what is protected. Where such substantial decisions are made, Indigenous socio-philosophies, ecological knowledge and values need to be included to a much greater extent.

Indigenous nations live on all continents, and exceptional biodiversity is preserved on Indigenous territories. This can largely be explained by the fact that for Indigenous peoples individual entities exist in terms of relations and interactions, forming socio-ecological systems. In Indigenous thinking, humans, plants, animals and other ways of life are interdependent. For example, in Amazonia, the Apurinã view their palm trees, which are treated as their ancestors, as being directly connected to the rains. Likewise, for the Sámi, certain mountains like persons have their own joiks (music tradition), evidencing their similarities to humans.

The dominant societys’ unsustainable economies have, however, intensified land use and biodiversity loss in a catastrophic manner. The complex web of businesses, investments, and free trade agreements all draw from the idea of exponential growth. The currently negotiated EU-MERCOSUR Trade Agreement can intensify exports to Europe of beef, soybean, sugar, rice, corn, and wood for pulp, which are already at present produced in an unsustainable way. This growth is linked to subsidies for agrochemicals, fertilizers, and infrastructure industries, among other things. The plans for the Arctic Railway, to give just one example, was closely connected with resource extraction plans in the Arctic.

Environmental and climate changes have already disturbed the relations in ecosystems, including humans. Floods, extreme temperatures and change of seasons are evidenced from the Arctic tundra to the Amazonian rainforests. No place exists in a vacuum: the melting of Arctic ice affects other parts of the world and what happens to Amazonian humidity is felt in Europe.

In the post-pandemic world, it is time to reflect whether decision-makers will continue following the old models or create something new. Picturing the far future could benefit healthier models of the economy. Circular and nature-based solutions and economies as well as degrowth, meaning a systematic reduction of consumption, already promise alternative long-term plans for the planet. Can they, however, be effective in stopping land grabbing, contamination and diverse environmental impacts, which are seen by many as crimes against humanity?

The very defence of their lands has already brought an increasing amount of violence into the lives of Indigenous peoples. In the Amazon, because of invasions and the lack of state inspection in Indigenous lands, the deaths of Indigenous land defenders have increased in recent years. Wherever possible Amazonian local communities continue to carry out their own territorial surveillance and protection, but they have limited resources.

Indigenous peoples need to be involved

Nation states have largely ignored their political responsibilities and have not consulted Indigenous nations. There have even been attempts to change legislation, and mining concessions and permits, for example, have been granted even in conservation areas. Consultation is legally mandated whenever an economic activity, administrative or legal measure may affect Indigenous lands, their resources and their ways of life. This right is recognized in many constitutions, in Convention 169 on Indigenous and Tribal Peoples of the International Labor Organization (1989), the UN Declaration on the Rights of Indigenous Peoples (2007) and the Convention on Biological Diversity (1993), which mentions a set of principles for assessing the impacts of new projects in Indigenous lands as well as their socio-cultural dimensions. 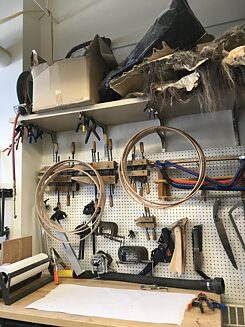 A work bench with Indigenous art tools in Fairbanks, Alaska. | © Pirjo Kristiina Virtanen Free consultation means not only informing but also establishing a long-term dialogue. It is not merely a public hearing. Time should be given to consider negative and positive impacts and to ask questions, for example where the bureaucracy or certain technical terms cause problems of comprehension. In 2018, the Expert Mechanism on the Rights of Indigenous Peoples launched its study on free, prior and informed consent as a human rights norm. It refers to the fact that nation states must ensure that Indigenous peoples have the resources and capacity to effectively engage in consultation processes.

Indigenous peoples have shown effective ways of guarding life on their territories, and they are worth listening to. Their land-based socio-philosophies do not view earth as an infinite space to exploit with short-term profit-making in mind. Neither are these philosophies based on binary categories such as “human” and “nature”, nor do they occupy different social spaces: both humans and nature are part of “culture” and exist in relation to each other. Such thoughts can create new practices, new models and new legislation beyond Indigenous contexts.

There is much scientific information already available that has been produced with Indigenous societies, information which could be much more benefitted in an ethically sustainable way. In particular, in recent years, there have been several Indigenous studies programmes and Indigenous academic researchers who have brought new knowledge to academia. This information has great potential to contribute to a more inclusive knowledge-making and understanding of different social realities and values. For the dominant society, Indigenous voices can offer novel perspectives on the sustainable present and the future.

Considering the post-pandemic future, the mere acknowledgment of environmental and Indigenous laws is not enough, they also have to be implemented and developed. It requires careful planning to guarantee the participation of locals in decision-making processes and their follow-up mechanisms. Even when dialogues have taken place, the eventual political decision is often another matter and can actually contrast with Indigenous voices. For the survival of the planet, the knowledge and values of Indigenous peoples will help build a more integrated future in our post-pandemic world.

* The title of the project comes from the long battle of Inuit to have their rights linked to climate change. The book of the same name by Sheila Watt-Cloutier (2015, Allen Lane Publication), testifies of her pioneering work in connecting climate change to human rights. Okalik Eegeesiak, Former Chair of the Inuit Circumpolar Council (ICC) used the expression in her discourse at the United Nations Framework Convention on Climate Change COP 21 December 3, 2015 in Paris, France. Martina Vetter is a freelance editor and author specialising in architecture and urban development along with film, theatre and culture. Her book “Kraftwerk Sendling – Eine Verwandlung” (The Sendling Power Plant – a Transformation) was published recently.