Andreas Degkwitz
Germany
Have we perhaps never had even a clue as to what freedom is?

Freedom and responsibility are directly related – but we often do not care to admit it. Those who desire freedom without assuming responsibility run the risk of restricting the freedom of others as much as they do their own. Freedom is therefore charged with preconditions.

In this sense, freedom is based on both intangible and material values. What is usually underestimated is the responsibility associated with freedom. Freedom of speech and of consumption - to adhere to these examples - require responsible action in order to guarantee both the one and the other of these freedoms over the long term. Or put even more concretely: The right to assert claims is certainly one of the assets of freedom. But if one makes excessive demands, one is acting irresponsibly, since the freedom taken in doing so is at the expense of others and thus restricts the freedom of others. Those who recognise in the concept of 'freedom' only the freedom to satisfy acute needs, take the freedom to ignore the consequences of their own conduct at the same time. 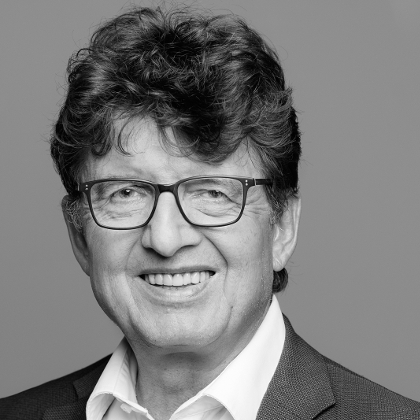 © Die Hoffotografen GmbH
Freedom is therefore always a challenge and not something to be taken for granted. Freedom requires insight and empathy if we are to be able to live responsibly. If we desire to exercise freedom without responsibility, we have forgotten what freedom is and what its preconditions are.

But this in turn raises the question as to whether the complexity of our time in fact enables responsible action as a prerequisite for freedom. Are we aware of the responsibility we assume with freedom? Do we realise that insight and empathy are essential prerequisites for freedom and responsibility?

Mechanical methods for the evaluation of data and texts are increasingly in use today for the analysis and evaluation of complex interrelationships in the process of digitisation. These evaluation methods of "artificial intelligence" are based on algorithms that are used on computer clusters where extensive databases and text files are stored. The results of such evaluations are increasingly being used as a basis of information for assessing facts and making decisions. Against this background I would like to pose the following question: Can the decisions of "artificial intelligence" based on algorithms better guarantee freedom in the long run than human beings who are perhaps all too often overwhelmed by the preconditions for freedom?

Follow-up question:
Can the decisions of "artificial intelligence" based on algorithms better guarantee freedom in the long run than human beings who are perhaps all too often overwhelmed by the preconditions for freedom?

Andreas Degkwitz, born in 1956 in Frankfurt/Main, Germany, studied classical philology and literature in Freiburg, Basel and Vienna. He was previously professionally active as a librarian in Heidelberg, Karlsruhe, Bonn, Potsdam and Cottbus, and has been living and working in Berlin as a head librarian since 2011. He also writes short stories. His prose debut Magenta, Yella und Despina. Snapshots von Liebe und Tod (i.e. Magenta, Yella and Despina, snapshots of Love and Death, available only in German) was issued by the Berlin publishing house PalmArtPress in October 2018.