Ulf Erdmann Ziegler The Political and the Private

Ulf Erdmann Ziegler‘s latest book is a political novel set in the period between 2011 and 2014. The National Socialist Underground (NSU) has been uncovered and politicians are experiencing a political and private debacle. 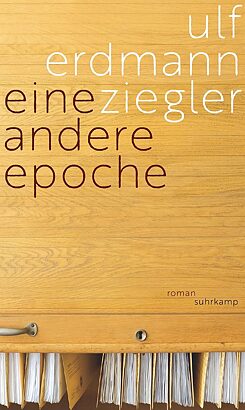 © Suhrkamp In Eine andere Epoche, (Another Epoch), Ulf Erdmann Ziegler describes the peaks and troughs of political life. Some politicians are presented by their real names, while others, although clearly recognisable, are given other names. The story focuses on 40-year-old Wegman Frost, a cog in the political system, who heads the office of Andi Nair, an ambitious Member of the German Bundestag.

Andi Nair is quite clearly based on the real politician Sebastian Edathy (SPD), who distinguished himself in his unbending fight against right-wing extremist violence in his capacity as chairman of the parliamentary committee of enquiry into the NSU. However, he was forced to resign from parliament in 2014 amid the “Edathy Affair”, involving accusations that he was in possession of paedophile material.

FROM the PROVINCES OF LOWER SAXONY

Wegman Frost’s path into politics is mapped out by a childhood and adolescent friendship. He calls himself half-Indian because his mother is German and his father is Native American. He spent his first years in an American artists’ village called Hope. He can hardly remember his father. His mother does not really look after him. He grows up with his uncle in the provinces of Lower Saxony, Germany.

There, in the town of Bückeburg, he makes friends with Florian Janssen, a Vietnamese orphan adopted by a German couple when he was a baby and nicknamed “Kung Fu” at school. Florian has meanwhile progressed to become Vice-Chancellor. Easily recognisable here is former FDP Chairman Philipp Rösler, whose fortunes notoriously declined after the 2013 Bundestag elections when the FDP failed to win any parliamentary seats.

NO FRIENDS LEFT IN THE END

In his private life, Wegman enters a relationship with Marion, a feisty estate agent with a dark-skinned daughter. Ellie’s father was killed in New York’s Twin Towers in 2001. Wegman assumes the role of surrogate father and develops a much deeper attachment to Ellie than to her mother – the future of his relationship with Marion is rather uncertain.

Conversations with Ellie, who is very bright and asks the right questions, are about relationships, but also about the bigger picture, seen from a child’s candid perspective. Ellie announces, for example, that she would not want to be a politician because “Everyone’s always watching, and in the end, you have no friends left.“ Which neatly sums up the two facts that politicians are always in the public eye and that political friendships last only as long as political success.

The uncovering of the NSU murders, accusations of corruption against the then Federal President Christian Wulff, unsavoury rumours about his wife, Wulff’s resignation, the assumption of office by Joachim Gauck, referred to in the novel only as “the pastor“ – all that happened only about ten years ago, but it really does seem to be another epoch.

As well as discussing, politics, Ziegler presents a detailed discussion of the subject of family background, usually involving a problematic childhood. Flashbacks give the characters the required depth, making the novel more than simply a literary re-fashioning of contemporary events. The private and the political spheres cannot be separated.

In the end, it becomes clear how dependent Wegman Frost is on his “employer”. When Andi Nair decides to resign from the Bundestag “for health reasons”, clearing his office without much ado, his unsuspecting head of office is left with his career in tatters. But perhaps his private life will open up a new opportunity.