We’re often told that freedom to travel and globalisation are mutually dependent. According to sociologist Steffen Mau, however, borders have not become more open in recent decades – quite the opposite. 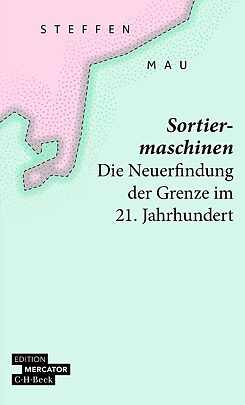 © C.H. Beck Who hasn’t heard it before, the hymn of globalisation? Globalisation has increased international exchange and the mobility of people worldwide. It may be true that more people are on the move. But when we recall images of refugees in 2015/16, the conditions in refugee camps like Moria in the spring of 2020 or the current situation on the Polish-Belarusian border, we realise that borders are by no means equally easy to cross for all. In the past decades, borders have become more permeable mainly for the people of the global North and the rich of the global South.

“Borders are back!” proclaims the first chapter of Steffen Mau’s new book Sortiermaschinen. Die Neuerfindung der Grenze im 21. Jahrhundert (Sorting Machines: Reinventing the Border in the 21st Century). While goods, services and capital can circulate quite easily worldwide, the majority of the world’s population is systematically restricted in their freedom to travel; the border is increasingly becoming a great “inequality generator.” Many people are therefore “territorially fixed” today.

(partial) closure of the world

Mau contrasts “opening globalisation” with “closing globalisation.” Globalisation is a dialectical process. For Mau, facilitating travel and excluding freedom of travel and movement are two sides of the same coin: “Because globalisation exists, borders gain in importance, are successively upgraded and used as sorting machines. Consequently, border closure and border control are not only compatible with globalisation, but are an integral part of and a prerequisite for opening.”

Globalisation is therefore not a removal of boundaries; neither in the figurative nor literal sense. Mau looks at the phenomenon of the border from different perspectives. In principle, borders serve as territorial demarcations; they separate states. But they also have a selection function as a filter of mobility. According to Mau, borders have been re-equipped in recent decades to meet the conditions of globalisation. They enable desired mobility while preventing undesired mobility. And this process will continue.

There is a growing number of “fortified” borders; borders secured in a military-like manner by walls, fences, barbed wire, technical surveillance, etc. The construction of such border defences has increased sharply since the turn of the millennium. While there were only two in the 1950s and twelve in 1990, there are now over 70 fortified borders worldwide.

In addition, borders are becoming smarter. Smart borders are digitalised borders. This can be technological border surveillance using drones, radar systems, thermal imaging systems, acoustic sensors, etc., but also automated border controls at airports. There, passengers scan their passports and fingerprints themselves and are questioned by avatars instead of border officials. They are monitored by cameras that evaluate the passenger’s “microexpressions” – similar to a lie detector (see the netzpolitik.org article on the EU project iBorderCtrl). At the same time, data matching processes are also accessing various databases. This even goes so far that “voluntary data donations” enable travellers to obtain better status (e.g., the trusted traveller programmes of the USA) after the motto “data in exchange for mobility”.

In another chapter, Mau uses the EU as a prime example of how the dismantling of internal borders goes hand in hand with a sealing off of the outside world. While EU citizens in the Schengen area can travel without border controls and freely choose their place of residence, surveillance of the EU’s external borders has been massively expanded.

The chapter on the “extra-territorialisation of control,” or the “expansion of the border zone” is even more topical and forward-looking. For both the EU and the USA, for example, are working to already stop “undesirable” migration in the countries of origin or transit. Thus, the German or European border is not only defended at the often-cited Hindu Kush[FG1] , but also in Africa. The EU supports Niger, one of the poorest countries in the world, but at the same time a bottleneck for migration from southern and western Africa, in training and building up border personnel. Moreover, development aid money is linked to the expansion of border surveillance: “The name of the deal is money in return for migration prevention.” In Libya, the EU has supported the development of the coast guard to prevent people from fleeing across the Mediterranean. But those apprehended are then held indefinitely in a network of Libyan prisons (see this detailed report in The New Yorker). Overall, this creates a European shadow immigration system on the African continent.

In the final chapter, Mau notes four overarching trends of the globalised border regime. There is a “securitisation of mobility,” through which manipulable risk assessments and a “culture of suspicion” prevail. Then, the surveillance potentials made possible by new technologies and digitalisation will be exhausted to create increasingly nested controls before, at and behind the border. Furthermore, mobility rights will be increasingly unequally distributed: they will continue to depend mainly on citizenship or passport, but a person’s “economic endowment” (financial or human capital) and other positive assessments (based on health, behavioural or other data) will also increase inequality. The final trend Mau cites is the “global hierarchy” of inequality that cements the globalised border regime.

Maus’s sober but convincing diagnosis of the border as a sorting machine and generator of inequality is not exactly encouraging: “The border of globalisation is at the same time a border where inequality is generated and made permanent.” It is reminiscent of dystopian science fiction films like Code 46 (2003), in which possession of the right “papers” decides who gets to live in the global centres and who in the life-threatening periphery.