Sales of a novel published in 2008 are slow, then the remainder warehouse burns down. That was it, you might think. But the Kanon Verlag is republishing Bov Bjerg‘s debut novel. 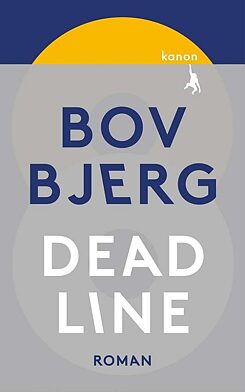 © Kanon Bov Bjerg made a name for himself with his bestselling novel Auerhaus in 2015, and in 2020, his second novel Serpentinen was shortlisted for the German Book Prize. Bjerg’s debut novel, published in 2008, predates these two novels, but it was a flop. At the time, Nicole Schmidt prophesied on literaturkritik.de that the author, previously known only for his readings, would “indelibly inscribe himself in the young German literature scene with this work. Now he has become a writer no interested reader can ignore, and rightly so.“

Deadline has been resurrected, thanks to the Kanon Verlag publishing house, which was established in 2020. A cumbersome work that had difficulty finding a publisher in 2008, as publishing director Gunnar Cynybulk comments in his readable epilogue: “This was not the sophisticated entertainment everyone was looking for.“ In the end, a reader at Mitteldeutsche Verlag publishing house recognised the novel’s literary quality. Unlike most contemporary literature, it did not pretend that “modernism never happened”.

It is indeed rather difficult to get into Deadline at first. It is an experimental novel; in this respect Bov Bjerg “blustered around a bit”, as he put it in an interview with Deutschlandfunk Kultur. Language is questioned and dissected. The paratactic style corresponds to the life, mindset and obsessions of Paula, the main character, who suffers from the professional disorder of “compulsive memory hoarding“, “obsessive observation, naming|cataloguing“. A translator of user manuals, she describes her surroundings in meticulous technical detail, paying attention to every word. Often, she cannot find the mot juste. In the text, Bjerg represents this by putting vertical lines between the alternatives: “The polystyrene box grated|rasped|squeaked as I took it out of the lattice box.“ Unsurprisingly, such translations do not amuse her clients.

Paula, an obese woman in her late thirties, lives in Boston and loves donuts. This is how she sees herself: “The inside of her thighs rubbed|chafed against each other with every single step and I sweated like a pig, you fat sow.“ At the beginning of the novel, she is on her way to the airport to visit Swabia, where she comes from. Together with her sister and brother-in-law, she has to give up her father’s grave.

Paula’s life is marked by deadlines, which she almost always meets. As the book’s title suggests, of course, a deadline may refer not only to a fixed delivery date but also to the end of a lifespan. The line between life and death, or to put it more precisely, her father’s early suicide, left its mark on Paula. On that occasion, when she was “no more than about five years old“, she arrived too late. She is nagged by self-reproach because there had been a number of previous suicide attempts: “He always arranged it so he would be discovered in time. It was inevitable that it would go wrong sometime. I had decided that this time, it would go wrong.“ Paula has been obsessively punctual ever since. “Overpunctual. Which was an advantage at work today.“

Back in her old surroundings, Paula’s traumatic past catches up with her. The many flashbacks are introduced by the word “reconstruction“ and end with “slash reconstruction“. Paula lives life in a loop: ”This constant repetition. Repetition is recollected forward (Kierkegaard).“

Her father, a stonemason with a depressive tendency, earned his money all his life by making gravestones, paving his patio with discarded stones: “When Father laid the stones, he always made sure the front side faced upwards. At the bottom were two rows of numbers and a cross. 1861 plus 1937 = 3798. I could add them up in my sleep.“ Here, morbidity is literally the ground we all walk and stand on.

THE SMELL OF GRAVESTONES

Almost as an aside, there is a bizarre sex scene between Paula and her brother-in-law in a cot. A warning to anyone who might be thinking about imitating them: cots are not suitable for this purpose!

The novel also features a splatter movie moment. One night, Paula joins Wagner III, the grandson of the gravedigger of her childhood (jobs are passed on from generation to generation in the Swabian provinces, it seems) to remove her father’s remains from the abandoned grave. This macabre episode is not for the faint-hearted. After all, who has ever taken a good look at a soap mummy? If nothing else, you discover that soap mummies are not as malodorous as gravestones, which can exude a horrible stench.

Paula works away on her father’s grave, obliterating his name and carving her own into the stone. “Writing is overwriting“, we read in the epilogue. At the end, Paula flies back to Boston, thinking, fearing and hoping she might be pregnant. That is another thing that Bjerg‘s unusual, linguistically impressive debut novel demonstrates – that living means surviving.