The climate crisis threatens the “eternal” ice at the poles and on glaciers. Anyone who occasionally follows the news knows this. But knowledge about the subject is often as thin as the ice should never be. A wonderfully designed book offers insights. 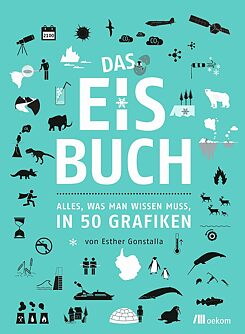 © oekom Verlag The work of book designer and infographic artist Esther Gonstalla is devoted to contemporary environmental issues. In 2017, she published Das Ozeanbuch, which appeared in English as The Ocean Book, followed by books about the climate (Das Klimabuch, 2019) and forests (Das Waldbuch, 2021). Her most recent publication Das Eisbuch takes on the ice. In each of her books, Gonstalla promises that 50 infographics reveal “everything you need to know” about each topic.

It starts with scientific terms. For example, the cryosphere is the totality of ice on a celestial body. On Earth, it includes the ice at the North and South Poles, on the glaciers, in permafrost soils, but even snow and the ice crystals in the clouds. The bright surface of snow and ice has an important function for the Earth’s climate and atmosphere: the albedo effect. Albedo is the measure of the reflectivity of a surface. While ice and snow reflect up to 90 per cent of the sun’s rays and thus prevent the earth from becoming warmer, the ice-free sea reflects only 7 per cent of the sun’s rays.

But the earth’s ice masses are melting. This is happening particularly quickly in the Arctic, where temperatures are rising the fastest. There, the coldness of the air makes it very stable, which is why the warmed air does not escape upwards. Lakes with meltwater are created, in which dark algae form, whereupon the albedo effect decreases and the temperature rise is intensified. Due to the loss of sea ice, the Arctic Ocean is warming at an above-average rate – in August 2020 it was 3 °C warmer than the average for the years 1982 to 2010.

These complex and often abstract relationships are presented in visually appealing, vivid and impressive illustrations in Gonstalla’s book. This does not mean that the texts and infographics, most of which are double-page spreads, are simplistic. The pages on the interrelationships between ocean currents, salt and sea ice, the air currents at the poles or the retreat of the Antarctic ice shelf, for example, demand concentration from readers and viewers.

Gonstalla once again collaborated with numerous scientists from all over the world for her ice book, in particular with experts from the Alfred Wegener Institute. After the predominantly ominous facts about the future of the ice worlds, the last chapter “Humans and Ice” ends with tips on how to reduce one’s own ecological footprint. Gonstalla’s books should be compulsory reading in schools and, of course, elsewhere!