Clemens Meyer’s latest collection of short stories is about slag heaps, mines, devastated landscapes and people. The stories take readers down into the mining tunnels of recent history.

To take a brief look back, Clemens Meyer’s debut novel Als wir träumten (As We Were Dreaming) was celebrated as a long-awaited “turnaround” novel and nominated for the Leipzig Book Fair Prize in 2006, a prize he won in 2008 with the short story collection All the Lights. His novel Bricks and Mortar was shortlisted for the German Book Prize in 2013.

Most recently, Meyer has devoted himself to the genre of the short story. After Dark Satellites (2017), two more short story collections have been published in the past two years by the Leipzig publishing house Faber & Faber.

ATMOSPHERIC PICTURE OF A dark TIME 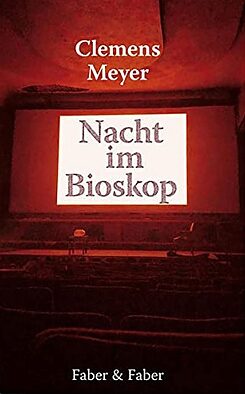 © Faber & Faber Nacht im Bioskop (Night in the Bioscope) is the title of the story “from the Great War” published in 2020. What is a bioscope, one may ask? About halfway through we learn that it is an early projection apparatus invented by the pioneering Skladanowsky brothers, which was first used to show films in Berlin in 1895.

Meyer’s story, however, takes place in 1942 in Novi Sad, which is in present-day Serbia. The Hungarian occupation forces – allies of the Axis powers – commit a massacre in January 1942. Holes are shot into the ice of the frozen Danube and hundreds of people, mainly Jews and Serbs, are shot, thrown into the river and drowned.

A nameless cinephile, a member of the fascist Ustaše movement, wanders through the city. He meets a Serbian housemaid and together they seek refuge in a cinema. The man then rescues the young woman and a baby from the henchmen of the Nazi regime. He also looks after the maid’s mental health – in the cinema, as in life, sometimes we want to see more than is good for us. He blindfolds her to spare her the sight of the gruesome scenes on the Danube: “She cannot see the river ... A few times she tries to push the blindfold aside, but he takes her hand. ‘No. Don’t look’.”

OF CAVES AND DRAGONS 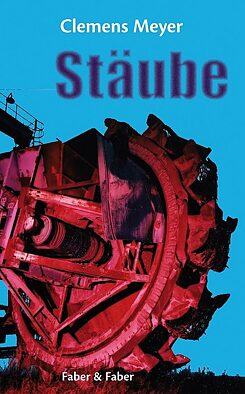 © Faber & Faber In Clemens Meyer’s latest collection of stories, Stäube (Dusts), he again travels back in time, this time to the recent (East) German past. Slag heaps, mines and caves are the enchanted places that blur reality in the realm of fantasy in the three stories.

In the first story, at Christmas a man visits his elderly mother, who lives in a largely depopulated brown coal village near Bitterfeld. While there, he delves into memories of the time when the snow still fell black from the sky. The second and longest story is about a unique trip down a mine. A man descends into a cave and loses both spatial and temporal orientation. Deep inside the earth, the complex character also becomes trapped in the confusing corridors of memory. As if in a hallucination, a grandfather emerges. He worked in the mines and rescued his grandson from the tunnel in the past.

The last story is about a 13- or 14-year-old girl who falls in love with an older boy from ex-Yugoslavia. This makes her clique berate her as a “Kanakenbraut” (dago lover). She occasionally rides with the young man on his moped to the village where she grew up; to the stripping shovels there, the “dragons” of open-cast mining. They live in caves from which the many different kinds of dust come: “When I was very young, I knew them all. They come from the layers of the earth in which our village disappeared and in which the dragons dig their caves.” Otherwise, the girl loiters with her peers at the Zwickau train station. They wait for tourists and in exchange for money offer to lead them to the place where the house of the NSU terrorists once stood, who the young people consider their heroes. The girl has a talent for telling and inventing the best NSU stories.

At the end of the volume there is an essay of almost thirty pages called “Wozu Literatur” (Why Literature), in which Meyer writes not only about his favourite and most important authors – almost all men (Honoré Balzac, Joseph Roth, Mikhail Sholokhov, Isaak Babel, Fred Wander, Bernhard Traven, Ernest Hemingway, but also East German writers Wolfgang Hilbig, Werner Bräunig and Franz Fühmann). In this essay, Meyer complains about contemporary literature, in which too much is written about the irrelevant and the personal: “The idea of seeing social upheaval as a customary quarry for a (German) literature seems to have been lost. Biographical and personal minutiae, plus banal little histories, tame narratives; no more journeys to the end of the night or, for that matter, to its beginning!” This essay is written by the somewhat grandiloquent Clemens Meyer.

In his stories, though, we experience the subtle Meyer, the master of telling stories of historic upheavals, of inner and outer landscapes, in a completely ambiguous way. The volume is enhanced with photographs by Bertram Kober, which complement the writing quite well. They show caves, rocks, slag heaps, huge excavators, decaying buildings and landscapes.