What happens when your own wife falls ill and can’t get up? Simply everything changes. Pensioner Mr. Schmidt used to give household chores a wide berth, at most taking German shepherd Helmut for a walk. 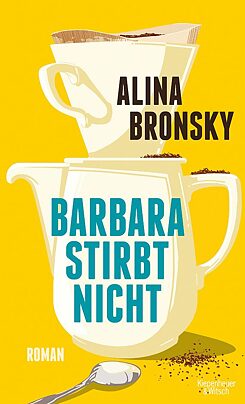 © Kiepenheuer & Witsch Pensioner Walter Schmidt, referred to by author Alina Bronsky throughout as Mr. Schmidt, is a contented dog owner. Married to Barbara for 52 years, he finds her lying on the bathroom floor one morning. She has been taken ill and from now on hardly ever gets up. Mr. Schmidt’s world thereupon falls apart as he has absolutely no clue about running a household or doing the cooking. He has never made a cup of coffee in his life, let alone laid the table. His main worry is less to do with his wife than about looking after number one.

However, for want of an alternative, Mr. Schmidt grits his teeth and gets down to business, firing questions at the baker’s assistant as the queue gets longer and longer behind him. He discovers a television chef and learns a lot from him, and uses Barbara’s profile to go on a splurge on her Facebook page.

Alina Bronsky has come up with a stubborn, self-centred character whose quirkiness is very funny, but drives the people around him crazy. On the phone to daughter Karin, she tells him to call an emergency doctor. Mr. Schmidt’s curt reply: “It’s not an emergency. She just drank my coffee.“

For Mr. Schmidt – having finally learned to cook – everything revolves around restoring Barbara to health with his food. He compensates. She has to eat. After all, she has to be able to run the household for him again; at the beginning, it’s just about him. But she has no appetite. Even that is something Mr. Schmidt takes personally, and it makes him furious.

It's hard to imagine Mr. Schmidt ever having been young – he must simply always have been old. And having seen him present himself as a grouchy, rude misanthrope who never stops whinging, it’s just as hard to imagine him having two children. No wonder Sebastian and Karin don’t have a great relationship with their father, who is incapable of having a good relationship with anyone except his regular drinking mates, with whom he shares a passion for German shepherd dogs.

NOT SO UNPLEASANT AFTER ALL

Barbara’s diagnosis is not revealed to readers. Only her children are in the picture because they went to the doctor with her. In the end, everyone around Schmidt appears to know, (which, amazingly, surprises him), except him. At least, he pretends to be surprised. His emotionally suppressive behaviour may be described as symptomatic of older people – when you deny an illness or a problem, it does not exist: “Yes, maybe he was alone in believing that things could disappear if you ignore them long enough.“ Until this eye-opener towards the end of the book, Bronsky presents Mr. Schmidt as a mean-spirited, old-school geezer who is oblivious to what his wife is going through. But now a rough diamond emerges. Mr. Schmidt is just worried about his Barbara – a delightful, deftly-introduced twist!

Alina Bronsky’s Barbara stirbt nicht (Barbara is not going to die) is a tough but witty story, lightly told. The language is dry, direct, succinct, and in keeping with Mr. Schmidt. It is not easy to put up with him - but that adds to the appeal of his story. Right at the end of the book, you can’t help almost forgiving this unpleasant character: “In the end, Mr. Schmidt realises he could be someone completely different – and finally sets out in that direction”, says Katja Essbach in  NDR Kultur. A family secret is involved…. This is a page turner – read it!