A “curiosity cabinet of travel” has been published for anyone planning a trip in Germany – even if think they already know everything about the country. 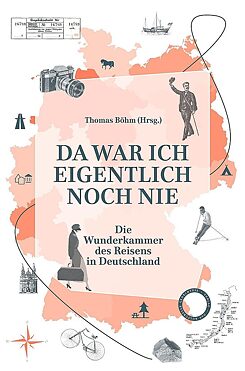 © Verlag Das kulturelle Gedächtnis As we all know, freedom to travel has been restricted in many ways over the past two years due to Covid. This year, as in 2021, we are all looking forward to spring and summer and a possible end to the pandemic. Whether you’re planning a journey inside Germany or just want to roam about freely on an imaginary one, you’ll enjoy the travel book Da war ich eigentlich noch nie (I’ve never actually been there), edited by Thomas Böhm.

The book not only reveals the most visited spa towns, the zoos with the most animals, the most popular bathing lakes, the most frequented cycling paths or where the fastest roller coasters are. It really is the curiosity cabinet promised in the subtitle, largely presenting rarities and oddities. In his foreword, Böhm describes that he wanted this book to lend Germany a magical aura, similar to his childhood memory of driving with his family in a VW Beetle to Mespelbrunn Castle in the Spessart Mountains at the age of five. “The feeling that there are delightfully beautiful, unknown things, things worth discovering in our own country, whether a little closer or farther from home, has never left me since then.”

It’s about places and landscapes, but the book’s pages are full of anecdotes from cultural history and literary finds on travel. For example, the functional clothing that today’s hikers consider essential would probably not have been in the luggage of foot travellers in 1843 even if it had already existed. At that time, the top priority was to “appear respectable among respectable people” even when journeying on foot, which is hardly possible in functional clothing. Back then, the recommendation was to pack a silk scarf, slippers and “lightweight, short laced boots.” Yet a piece of bread sufficed as provisions.

At the age of 40, the Bavarian regional poet Ludwig Ganghofer (1855-1920) took great pains to “master the capricious devil’s machine,” in other words to learn to ride a bicycle. But only two years later he wrote a eulogy to the bicycle, this “indispensable factor of modern life.” The Berlin bicycle pioneer Amalie Rother began cycling in 1890 and extolled the emancipatory effect of the vehicle. In 1897, she wrote an article about women on long-distance bicycle tours, in which she also explained why French women didn’t undertake them. It was because of the “rearing of French women to dependency.” Moreover, a French woman could never be induced to “show herself in any dishevelled state. This is unavoidable on a cycling tour.”

Lovers of lists will also be satisfied. For instance, the book offers a list of accessories for a camping kitchen, but also lists of what to pack for city trips, for ladies and gentlemen, albeit from 1897. And anyone who’s ever wondered how long the list of tasks is for the daily cleaning of a hotel room will wonder no more after reading it.

As an essay by Johanna Schopenhauer, the mother of the philosopher Arthur Schopenhauer, from 1828 proves, parents with children have always been unpopular with travellers. She recommends a separate dining table for children, “at which they would be fed, under the supervision of their mothers, an hour earlier than the rest of the company, with food appropriate to their age,” which she claimed would be “a most beneficial and pleasing custom both for the children themselves as well as for the other guests.” Nowadays, children even have their say in hotel reviews; parents left the following online review: “Our 7-year-old son burst out crying when he saw this dump!”

Da war ich eigentlich noch nie is a jam-packed travel book that takes you on plenty of pathways and even more detours. It’s also highly suitable for rainy holidays!