Class society and the world of work Klassengesellschaft revisited

In Germany, the people who keep things ticking over and our whole economic system running are paid too little. If we look at the bigger picture, exploitation is happening on a global scale.

Helmut Kohl’s admonition “Let’s make achievement worthwhile again!” in 1982 initiated a fundamental process of change in the capitalist world of work. This wasn’t good news for those who contributed their labour because the definition of achievement was socially re-evaluated. “From then on, others were regarded as achievers: Entrepreneurs, managers, consultants; those who had money, influence and success.” The achievements of “normal” employees lost social recognition and became less and less “worthwhile” over the ensuing decades. 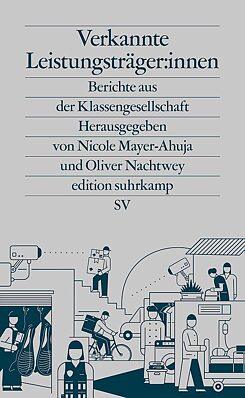 © Suhrkamp The two sociologists Nicole Mayer-Ahuja and Olivia Nachtwey cite five reasons for this development in the introduction to their anthology Verkannte Leistungsträger:innen (Unrecognized Achievers). Firstly, taxes were lowered, which mainly benefited the wealthy; “based on the daring assumption that wealth must have something to do with special achievements.” These tax losses resulted in an underfunding of the state, which secondly led to cuts in public services, especially in personnel. These cuts were largely achieved through outsourcing and privatisation of state activities. Thirdly, the social security systems were cut back and non-wage labour costs were reduced. This relieved the companies and gave the workers “more net from the gross,” but in cases of unemployment, illness or old age they received less support. Fourthly, pressure on the unemployed grew. The principle of support increasingly gave way to a system that made demands and sanctions. Fifth, thanks to this new “labour market policy, companies found enough people interested even in unattractive jobs.” The amount of precarious work increased. The low-wage sector grew and comprised about a quarter of all dependent employees in 2017.

From the engine room of our society

The upshot of is that we have long since ceased to live in a “levelled middle class society,” but once again in a class society. In this model of society, a person’s status is determined by their individual position in the class hierarchy, which in turn depends on qualifications, profession, gender, ethnicity, etc., but also on origin. The “opportunity structures of a society” are another factor that determines status: the social definition of “better” jobs that bring more income, prestige and privileges than others. People are higher up in the social hierarchy only “because others are lower down.” Finally, a person’s status also depends on their “position in the system of labour division,” which decides whether a person works relatively autonomously or is subject to the power of others, i.e., controlled and exploited.

The book’s very lucid introduction is followed by equally meaningful and instructive “reports from class society,” as promised by the subtitle of the book. A large number of individual cases from a wide range of service sectors are presented. These reports cover work in education and nursing, health care, the food industry, logistics, cleaning, close-contact services and much more. What all these jobs have in common is that they are poorly paid and often lead to precarious living conditions, although they make vital contributions to the “reproduction of labour power and social relations” and are thus actually “essential.”

The anthology provides profound and very realistic insights into the engine room of our society. The many quotes and life stories retold make the analysis presented in the introduction immensely vivid. For these sociological “portraits of people who deserved more,” the book has quite rightly landed at number 3 on the January 2022 non-fiction bestseller list.

Dirty work around the globe

© Knesebeck Those who want to broaden their horizons and understand the global connections of our economy and consumerism and their consequences are well served by Jan Stremmel’s Drecksarbeit (Dirty Work), another highly recommendable volume of reports. The journalist, who works for the Süddeutsche Zeitung and other media, offers, as the subtitle says, ten “stories from the engine room of our cosy lives.”

For his reports, he met sand robbers in Cape Verde, picked roses in Kenya, made charcoal in Paraguay, visited the last fishermen of the Aral Sea and worked on a coffee plantation in Colombia. He informs us about the local and historical backgrounds and confronts us with personal stories as well as unimaginable working conditions. When Stremmel visits a dyeworks factory in Kolkata, he understands too late why all the workers wear flip-flops. He had thought that his trainers would be better protection against the bubbling puddles on the floor. In the evening he understands why bare feet are better for this job: You can always wash the chemical broth off with water.

There’s also no lack of references to our lifestyle. For example, the huge sea of plastic-covered greenhouses in Andalusia, where vegetables are grown that are sold in German supermarkets in winter, is partly responsible for the fact that the water consumption of a German is just under four thousand litres per day: “That’s not because we take such long showers... But because of what we use indirectly.”

In simple, clear language, Stremmel shows us how people elsewhere in the world suffer and the ways natural environments are destroyed so that global corporations can be as profitable as possible and we can consume as cheaply as possible. On the rose farm in Kenya, it becomes clear to him. “As if under a burning glass, Lake Naivasha demonstrated what is true for ecosystems everywhere: Everything is connected.”