Now something has happened to Wolf Haas again. After an eight-year hiatus, he has published a new Simon Brenner thriller. Brenner no longer has any desire to snoop around as a private detective, but what is he supposed to do when body parts start appearing right under his nose? 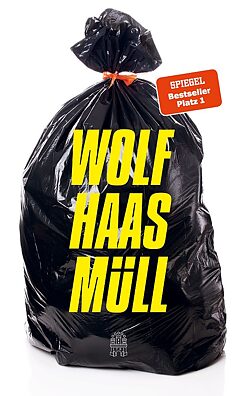 © Hoffmann und Campe A recycling centre does not exactly exude glamor. People working there are treated with respect, though, especially when you want to dispose of your waste according to the regulations. With its unique charm, the Viennese dialect has its own special words for things and officials, like Mistplatz for recycling centre and Mistler for its orange-clad waste operatives. This Vienna location is precisely where crime police inspector and private detective Simon Brenner has found refuge.

Brenner was hoping for peace and quiet as a waste operative. But although, according to the author, he never had a future, his past keeps catching up with him. In Wolf Haas' new novel Müll, (Trash) the waste operatives start off by finding just a human knee, but soon discover nearly all the other body parts. It goes without saying that Brenner is soon caught up in the case. “For Brenner, it was virtually a matter of honour,” says Haas.

In this ninth Brenner novel, there is once again a narrative voice telling readers lots of interesting things about the social milieu. The first thing you learn is that a recycling centre can soon become a school of philosophy. Sorting waste is all about making clear distinctions and precise classification into categories, “or rather tubs“. So “waste is the best school for learning to think”. A human knee is a challenge. It turned up in the bulky waste, tub 4. It definitely does not belong there. “If anything, a human knee would be organic waste, of course. Tub 19. Or if necessary, absolutely necessary, compost, as far as I’m concerned. Tub 12.“

Simon Brenner has always made a mess of everything. The older he gets, the less he cares about conventions. Why bother keeping up your own apartment when there are so many people whose flats often stand empty for long periods at a time? Brenner is a Bettgeher (bed lodger). Not a vandal, but “elegant, because all he does is make use of emptiness.” A bed lodger “transforms a furniture storage facility into a living apartment…, brings a dead apartment to life.“ This type of housing is trendy and popular into the bargain “because it’s very cost-effective and flexible.“ But there’s a catch: “You just need to pluck up courage to enter the void.“ Brenner’s previous police experience comes in handy for identifying suitable flats. The top priority is an easy escape route.

But one night, Brenner can’t sleep. For one thing, he can’t stop thinking about the suspected murder, and for another, he is afraid he might be suffering from blood poisoning. So he takes sleeping tablets and, as a result, fails to notice the flat owner returning home. She knocks him out with her vanity case and handcuffs him to the bed. It does not cross her mind to call the police, leading Brenner to have all sorts of fearful fantasies. But it is she, Ms. Rossi, who comes to Brenner’s aid at the end of the novel.

The heart of the dismembered body is missing, leading the daughter of the deceased to suspect the involvement of the human organ mafia. But of course, Brenner knows better. The murderer is the victim’s wife, who has disappeared: “Who else could it be? Ninety-five per cent of all murders are crimes of passion,“ he explains to his investigating ex-colleague, Ms. Kopf. Brenner was responsible for training her many years ago. After his traumatic experience as a bed lodger, Brenner now lives with Kopf, but he has still not come to terms with the past: “After not seeing each other for so many years and without any warm-up time at all, we are still just as bad as ever at making conversation.“

The story takes an unexpected turn, and the subject of organ donation plays an unforeseen role after all. It is a business, particularly where donor organs are in short supply, which specifically means Germany. In Austria, consent is presumed unless you actively oppose the removal of organs, whereas in Germany, you have to actively agree to it. Human lethargy means that the number of potential organ donors in Austria is higher than in Germany. That leads to waste operatives asking tricky legal questions: “What happens when an Austrian has a fatal accident in Germany? Does Austrian law or German law apply to their organs?“

Wolf Haas' Brenner novels are always enjoyable reading, and Müll is no exception. One happily lets oneself be carried away by this special Brenner sound that integrates spoken language into written text, conveying laconic or sarcastic maxims along the way. An everyday description of the concept of original sin goes like this, for instance: “That’s where guilt begins. It begins with the smallest things. And it never ends.“

The end of the novel is movie material, a showdown featuring glass waste collection vehicles by Lake Chiemsee in Bavaria. I would not be surprised, and in fact, would love to see this story on the big screen in the not-too-distant future. It definitely deserves it!