Youth in East Germany Looking Back on the Baseball Bat Years

Growing up in East Germany after German reunification is historicised and literarily reappraised in several novels – a time marked by a lack of prospects, frustration, xenophobia and violence.

In the early 1990s, racist violence escalated in Germany to a previously unimaginable extent. Half of the acts of violence at that time were committed in East Germany. The pogrom-like rampages in Hoyerswerda in 1991 and in Rostock-Lichtenhagen in 1992 were two sad highlights of these so-called “baseball bat years” (see the series by ZEIT online). 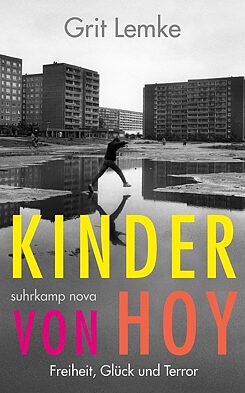 © Suhrkamp Last year, author Grit Lemke published Kinder von Hoy, a documentary novel about the events in Hoyerswerda and their prehistory. Lemke describes the time a group of friends around the narrator spent together from the late 1960s onwards. The subtitle “Freedom, Happiness and Terror” suggests that not everything was terrible in the planned socialist city. The prefabricated housing estate in Hoyerswerda is not only characterised by dreariness – an attribution given it from the outside, from the West – but also grants the teens a great deal of freedom and adventure. Lemke’s protagonists are initially both stunned and helpless in the face of the pogrom week of September 1991 until they themselves become the targets of right-wing violence. According to Marlen Hobrack of the taz, Lemke’s story is that of a “society of discontinuities”. For the “people experienced in disruption” in Hoyerswerda, the so-called “turning point” was not such a devastating break as is always claimed, especially in the West. Lemke thus exposes the “common eastern post-turning-point narrative once again as incomplete, simplified”. 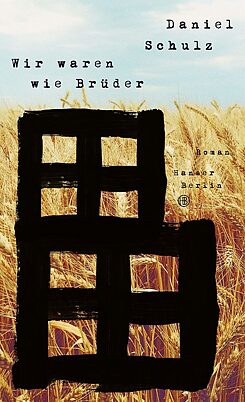 © Hanser Berlin In October 2018, Daniel Schulz published a personal essay in the taz about young people in East Germany. He has now developed this essay into a novel, which – like his essay – was published under the title Wir waren wie Brüder (We Were Like Brothers). In it, he describes his discomfort as a then “long-haired bomb planter” in a predominantly right-wing to extreme right-wing environment in a small town in Brandenburg in the 1990s. The narrator is unable to cope with the violent experiences in his environment. Although he dreams of beating up neo-Nazis, he has friends with similar views whom he rarely dares to contradict. Schulz’s is not a hero’s story. In the end, all that remains is escape to Berlin and the somewhat resigned realisation, “I didn’t fight and certainly didn’t win. I simply left.” 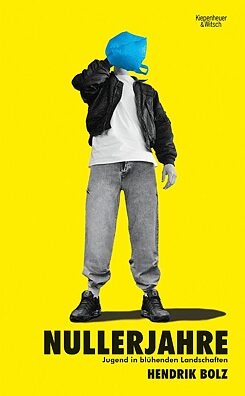 Kiepenheuer & Witsch Hendrik Bolz, part of the rap duo Zugezogen Maskulin using the stage name Testo, was born in Leipzig in 1988 and spent most of his youth in Stralsund. He wrote the novel Nullerjahre (Zero Years), which is set in a prefabricated housing estate in Stralsund. A good ten years after the fall of the wall, he writes about a “youth in flourishing landscapes”, although Helmut Kohl’s promised landscape applies perhaps to the spruced-up old town, but not to the outlying districts and certainly not to the inner lives of the characters. These are marked “by structural neglect, alcohol, drugs, violence and above all a lack of empathy,” writes Aida Baghernejad in the Tagesspiegel. Stylistically, the book is like an extended rap song, “set precisely to the last syllables, it has a very unique rhythm and a precise punch over the full distance of more than 300 pages. Formally, I haven’t read anything like it or as good for a long time,” Cornelius Pollmer writes in the Süddeutschen Zeitung. 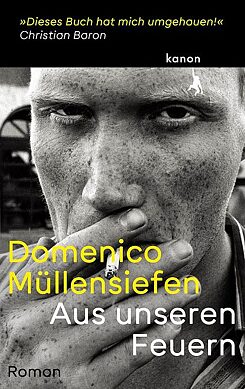 © Kanon Domenico Müllensiefen’s debut novel Aus unseren Feuern (From Our Fires) is also a post- turning-point novel. But unlike the other three novels, it is set in a big city, in Leipzig. The story, also autobiographical, is told from the perspective of a young man. Heiko works as an undertaker and in the summer of 2014 recognises his childhood friend Thomas in a corpse. This takes him back to the end of the 1990s and the 2000s. The three friends Heiko, Thomas and Karsten belong to a lost generation from precarious circumstances. They smoke, drink, dream of girls and hope for a better life, but their efforts regularly fail. After they torch a few school books, they discover their pyromaniac side and would like to see everything burn. In Müllensiefen’s work, neo-Nazis are only mentioned in passing, but the generation of fathers is harsh and embittered by the turning point. For Julia Lorenz of the taz, who praises the dialogue and supporting characters in particular, Aus unseren Feuern is “probably the strangest novel of the post-turning-point book spring”.