Gregor Sander East in the West

West Germans have spent more than 30 years looking at (or down on) the East. Now people in the East are looking back at them. In his new book, Gregor Sander takes a closer look at Gelsenkirchen, Germany’s poorest city.

The social sciences have been dealing with the subject of social identity for some time now. If you turn your attention to the subject of German unity, you will soon encounter the different social identities of East and West Germans. Sociologist Raj Kollmorgen, for examples, asks on the Federal Agency for Civic Education (Bundeszentrale für politische Bildung/bpb) website whether there is such a thing as an East German identity and to what extent it obstructs, or even prevents complete unification. German unification meant that East Germans, who make up approx. 17 percent of the population, automatically became a minority. Since then, that has resulted in “discursive subalternisation of East Germans,“ leading them to see themselves as “second-class citizens“. For Kollmorgen, East German identity has become “part of the debates on (postmodern) identity politics, which are about the autonomous self-identification of marginalised groups and their social recognition“. This puts East Germans on a par with “people with a migration background, people with disabilities or members of the LBGTQIA+ community“. This analysis definitely does not please everyone. 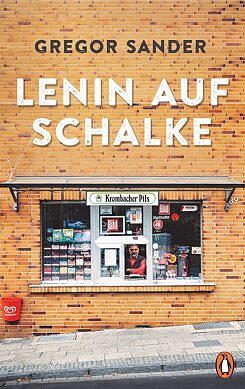 © Penguin Author Gregor Sander was born in Schwerin and lives in Berlin. His take on the subject, while not scientific, is highly entertaining. His friend “Schlüppi”, whose nickname derives from an anecdote featuring a pair of briefs from his stint in the National People’s Army, sends him to the West on a mission: to travel to Gelsenkirchen and write about it. Gelsenkirchen was chosen because it is said to be the “East in the West”, “Germany’s poorest city, with the highest unemployment rate and lowest per-capita income.“ Mission purpose? Retribution. The East Germans are under-represented but over-described: “People from the West have been describing, filming and looking at us non-stop for thirty years. Now it’s time we started looking back at them. And that is what you’re going to do!“

GABY FROM THE “ZONE” IN A HORROR FILM

It’s all about winning back sovereignty over the discourse – if you insist on putting it like that. In any case, Sander let himself in for it. The result has been published in a book called Lenin auf Schalke (Lenin at Schalke).

It features the fictionalised first-person narrator Gregor Sander, who arrives in the tristesse of Gelsenkirchen’s main railway station. Everything looks like “a horror film set”. Schlüppi’s legendary cousin Gaby comes to meet him. Her claim to fame is a single photograph taken of her in November 1989. Dubbed “Zonen-Gaby” (Gaby from the Eastern zone), she made it onto the cover of the satirical magazine Titanic, holding up a cucumber peeled like a banana.

Sander begins by exploring the unfamiliar city with Gaby and her boyfriend Ömer. “Mining-infected” Ömer takes Sander to the usual industrial heritage relics and tells him about his father, who came to Germany from Turkey aged 17. Upon his arrival, he was examined by doctors who “probably had done service on the ramps of a concentration camp”. There are some parallels to the East. The Palace of Justice in Gelsenkirchen “looks just like the presidential palace in a former Soviet republic“. The housing for mining families is reminiscent of the “workers’ intensive housing“ in the GDR, also known as “workers’ lockers“.

Sander writes about kiosks, known locally as Büdchen. He visits a “football pitch of death“ and learns that Gelsenkirchen is a city where women name their dachshunds after their deceased husbands (“He didn’t talk more than the dog“). When a city marketing employee tries to show the narrator Gelsenkirchen’s highlights, he admits that his work sometimes seems like “a losing battle“. Their tour ends in front of the house of legendary Schalke football club striker Klaus Fischer, famous for his bicycle kick, who regularly went out looking for his cocker spaniel that had gone missing in the neighbourhood.

There is also a discussion with an AfD politician, whose party has achieved double-figure results in Gelsenkirchen in recent years, both in regional parliamentary and Bundestag elections. In the West, that is considered success, in the East defeat. That prompts the narrator to start ruminating again: “Does it annoy me that the West only wants to be the East when it’s a matter of unemployment or Nazis?“

Written in report style, Lenin auf Schalke is also a parody of the West’s pitying and arrogant views of the East, and it has elements of a travel guide as well. In any case, this is a book to be read by anyone wanting to get to know Gelsenkirchen. A visit is worth every effort, especially because of its inhabitants. “The people deserve a closer look,“ says Sander in a Radio Eins interview.