Gert Loschütz Time that does not pass

When a single day determines a whole life. Gert Loschütz tells the story of a refugee whose escape now feels like history. 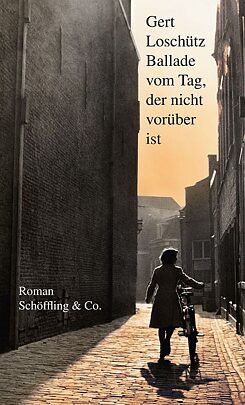 © Schöffling & Co. The late 1950s in an East German town. A mother sets off with her son early one morning with the intention of leaving East Germany. Woken up suddenly, the eleven-year-old has no idea what is going on. Something his mother says will stay with Karsten Leiser for the rest of his life: “Look, take a good look at everything because you’ll never see it again.“

Ballade vom Tag, der nicht vorüber ist (Ballad of the day that is not over) is a republished novel by Gert Loschütz, who was born in Genthin in 1946. Like his protagonist, he moved to the Hessian town of Dillenburg with his family at the age of eleven. In the novel, it’s called Wildenburg. The autobiographical elements cannot be missed, as is often the case with this author.

30 years later, the main character in Gert Loschütz' novel gives a very erratic and associative account of his life. The day of his escape determined his entire existence. From then on, he harboured a deep distrust.

A person beside you

The fictional town of Plothow, previously the setting of Loschütz’ 2018 novel Ein schönes Paar (A handsome couple), is the place Carsten Leiser had to leave when he was a child. The story is a life confession revealed to his former girlfriend Vera. For her part, she cannot trust Leiser and his fixation on his past, “this looking back, this not being able to get over it.“ She leaves him a notebook containing a description of him: “Had a tendency to go into his shell, act like a stranger, a person beside you.“ When she asks him what’s so special about his story in a “world full of escape,“ all he can say is: “That it’s mine.“

He has become a successful travel journalist, but that does not help him. Wherever he goes –  Rome, Sardinia, Ireland – he discovers places that remind him of the home he has lost. All his life, he remains a person betrayed and displaced. His memories have “eaten into him … like an illness.“ Loschütz finds many metaphors for inner states, such as the battered suitcase packed for the escape. The narrator cannot get rid of it. On one occasion, he goes to a pier and throws it into the waves. But even the sea refuses to keep the suitcase and washes it ashore.

The narrator is not reconciled to his life. He regards “the eternal natives, incapable of being harmed by any disaster” with a combination of envy and scorn, and sees them as “people for whom everything has congealed into an anecdote.“ The people he means, of course, are primarily West Germans with their humanist grammar schools that teach one thing above all else: “how to talk condescendingly.“

It takes some time for readers to get into this atmospheric novel, where much remains implicit. Loschütz also utilises the bag of tricks of unreliable narration, and some things remain unclear, puzzling. The narrator has little trust in other people, and he himself is equally little to be trusted.

Loschütz published this story as a radio play back in 1988, also with the title Ballade vom Tag, der nicht vorüber ist (Ballad of the day that is not over). The novel was first published in 1990 with the title Flucht (Escape), which the author now feels is inappropriate. In a postscript to the new edition, he writes: “Back then, it was obvious that the only thing that could mean was escaping from East to West… That has changed. Today, with so many people escaping from persecution and war, religious fanaticism, famine and climate disaster, the title is wrong. It suggests a connection that the novel does not have.“ In his mind, the story always had its current title.

Although Loschütz distances his novel from contemporary refugee stories, it still reminds us that people in many parts of the world are experiencing days right now that for them will never be over and that they will keep talking about all their lives.