A suspicious corpse, a zealous IT forensics expert, a criminal temp agency: Benedikt Feiten delivers a very contemporary crime novel that is also a social study of exploitation and digital commemorative spaces. 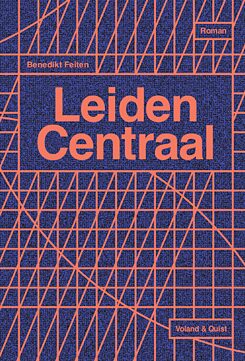 © Voland & Quist Hardly anyone knows exactly what the railway station Leiden Centraal in the Netherlands looks like, but Benedikt Feiten makes it possible. There’s a QR code on the last page of his eponymous novel that can be used (among other things) to call up a unique view of the station. The scaffold-like façade fascinated Feiten; for him, it radiates “a blueprint-like provisional nature that suits the three characters in the novel in different ways”.

The appearance of the structure – also taken up in the cover design – is also similar to a circuit diagram referring to the networks in which the novel’s main characters become perilously ensnared.

Take Adrian de Jong, a smart man with Romanian roots who pulls the strings in the opaque, illegal operations of a temporary employment agency. He is one of those responsible for using false promises to lure workers from Eastern Europe to countries like Germany, where they are forced to toil under horrific conditions. It’s reminiscent of real-life scandalous conditions like those in the Tönnies slaughterhouses that were brought to light in 2020, the first year of the coronavirus pandemic.

Adrian attempts to inures himself to the injustices he is abetting with big cars, all sorts of drugs and a cool demeanour. He exhibits no pity, no compassion. The only emotions he allows himself are in dealings with his son, who lives with his ex-wife; otherwise, they’re bottled up. Then one day, one of the cronies who had been making money with the help of Adrian’s firm is found dead on a mansion’s cold tile floor. The well-balanced system of operators and profiteers of the exploitative network starts to wobble and even Adrian, seemingly unflappable, loses his composure. “(He) tries to convince himself that things will eventually get better again. ... People have died. There’s no denying that. He’s going crazy, here alone in his flat... Hopeless and sheer despair. It’s never going to be okay.” His foreboding is not entirely false as it later becomes apparent in inhospitable places in the city of Leiden.

Until the final pages of the novel, Cristina Mitu keeps showing up at Adrian’s side. She, too, has a Romanian family background and she, too, is quite high up in the hierarchy of the temp agency. However, her “career” is based on neither greed nor callousness; Cristina is looking for her sister Loredana who came to Germany through the company’s smuggling network and then disappeared. No one knows about her secret plan to find her sister. Cristina is portrayed as a clear-sighted and controlled person. After getting through an identity check in Munich’s main railway station, she stops at a kiosk to buy cigarettes. “‘You speak very good German,’ the seller remarks as Cristina takes her leave. But that’s no compliment. It means that after all these years, she still has a slight accent ... I’ve lived here a long time, she wants to say, but Cristina suppresses the impulse. It’s better to be underestimated.” To escape her solitude and vent her feelings, Cristina writes text messages to her sister on her cell phone, sending them to a number that has long since been disconnected. Her texts sent into a black data hole conjure up idyllic memories of their childhood together in rural Romania. She never receives a reply. And at some point, Cristina can no longer deny the bitter realisation that although the sisters had a – perhaps idealised – past, they will never have a future together. “They embrace once again, press cheek against cheek. ‘I must go my own way. Thank you for trying to save me.’”

THE LANGUAGE OF DATA

We finally get to know Valerie Stetter, an IT forensics specialist with the Munich police, whose character is described fascinatingly by Feiten. She explains her profession to a one-night stand she’s picked up, of course, through a dating app. “Anything involved with securing digital evidence.” “So, you’re a cop?” ... “Do you have a gun, then?” “Yes. Depending on the situation, we also provide on-site support. Doesn’t happen often, though.” It does happen here, but it’s more Valerie going it alone than real support for her police colleagues.

By the time that happens, Valerie has dug deeply into the data clues and thus into the criminal behaviour of the temporary employment agency and its protagonists. She does this with almost escapist zeal. “Nothing matters anymore; not dates, not appointments, not her brother, no failed plans, nothing that makes her worry. Now it’s just her, the two screens in front of her, the device and the data.” Valerie never has to ask the classic detective’s question, “Where were you yesterday at eight?” She reads movements of all kinds from the various end devices. Thanks to almost exclusively digital communications, she gets to know the most intimate details of her counterpart’s lives, which occasionally occupy her emotionally to such an extent that the professional and the personal merge.

And because she is so good at what she does, because she wants to convict Adrian and his backers at all costs, she’s soon able to decipher his and Cristina’s clues and actions via the data network and begins trailing them digitally and physically. She and Cristina even meet in real life; they each have something to offer from which the other briefly benefits.

Finally, we come to the showdown in Leiden; a place name that ironically means “woe” in German – reflecting the woefulness of the characters who, although all absolute experts in their respective craft, are ultimately fighting lost causes. They live in a world in which everything seems planned, organised and predictable, but it’s an exploitative system that exacts a price that’s always been far too high. Escaping into digital spaces of memory and yearning can only provide temporary relief and what they have to do with the lives actually lived remains an unanswered question.