As we know, every unhappy family is unhappy in its own way. In her second novel Fatma Aydemir tells the story of a family full of longings and disappointments who try to come together in spite of all their inner contradictions. 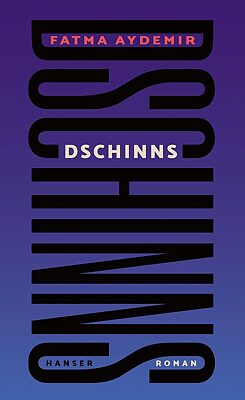 © Hanser “What is a djinn?“ fifteen-year-old Ümit asks his big sister Peri. It is night and they are sitting in the Istanbul apartment their father Hüseyin bought for his retirement. But the very day he travels from Germany to Istanbul to move in, full of anticipation, Hüseyin dies of a heart attack in the middle of the hallway. A djinn, Peri explains, is something that cannot be explained, something people find strange and unnatural, but which is not necessarily good or bad. She thinks everybody probably has – is possessed by - their own djinn. In Peri‘s family, everyone has an obsession. A past kept under wraps, a striving for independence, one’s parents’ unfulfilled expectations, a country and society that persecute them, do not accept them, even want to burn them.

Fatma Aydemir‘s new novel Dschinns is set in the late 1990s in a West German town. It tells the story of siblings Sevda, Hakan, Peri and Ümit, and their parents Emine and Hüseyin. While completely different from one another, the protagonists are linked by shared disappointments, longings, expectations and lies passed on through the family, which simultaneously invigorate and demoralise them. Hüseyin may be dead, but the father figure casts long shadows in the stories of his wife and children. Who was this man who came to Germany from a Kurdish village in the early seventies and slaved away in a metal works all his life, day in, day out? Why didn’t he do more, why did he hide himself away, his son asks himself. Why did he never say more about the time before he came to Germany, what happened back then, his daughter asks herself. What was he afraid of? And why didn’t he ever speak his mother tongue again?

The family travels to Istanbul for Hüseyin‘s funeral. They all come with their emotional baggage. The youngest, Ümit, is not allowed to love the man he loves. His football trainer takes him to see an unpleasant psychologist who attempts to treat him without his family noticing, using questionable methods. Peri, who becomes politically aware during her studies, goes to parties and lives in a big city, is burdened by more and more questions about her identity that her parents cannot or do not want to answer. Hakan, who wants to get so much right, and does everything wrong in the process, is torn by his father’s expectations of him and the limited possibilities his life offers. Sevda, who had to fight hard to lead a self-determined life and cannot forgive her mother for many things, is still dogged by the missed opportunities and injustices she has experienced. And Emine, the mother, tries to keep everybody together because she suffered loss so early on that she is still cannot forgive herself.

Each of the characters unfolds their complexity in one of the five chapters. The polyphony and dialogicity of the narrative make the conflicts between them ambivalent. They gain depth, showing how problems are carried down from one generation to the next, how one character’s anger and disappointment have their source in another’s pain. There is an immensely human dimension to these conflicts and everyone’s search for recognition and stability in a country that keeps showing them how unwanted they are. These are voices and characters still very underrepresented in German-language literature, although it is slowly diversifying, who open up an important discursive space.
“Perhaps family is nothing more than that - a web of stories and stories and stories,“ writes Aydemir. This novel, too, is a web of stories – finely tuned to one another.

Antonie Habermas works in the online editorial department at the Goethe-Institut headquarters in Munich.