Picture books can comfort us when grandma dies, make us think about our origins or connect a refugee story with a sea princess. And some are great art! 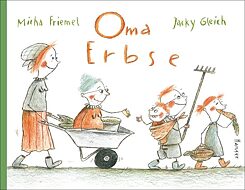 © Hanser Leonor’s grandmother is in hospital and things don’t look good at all. Her granddaughter visits her, but grandma doesn’t want to talk about death. “Grandma,” Leonor says, “it’s not so bad if you die. We’ll put you on the compost and as soon as the worms have eaten you, we’ll make peas out of you.” Grandma laughs and says that strawberries wouldn’t be bad either – or maybe a carrot? Leonor could feed it to a horse, which would then gallop away, she would like that. Micha Friemel’s Oma Erbse (Grandma Pea), a heart-breaking, wonderful mixture of comedy and childlike pragmatism, captures the grief over her grandmother’s death. And Jacky Gleich’s almost classic, simple line drawings suit it very well. 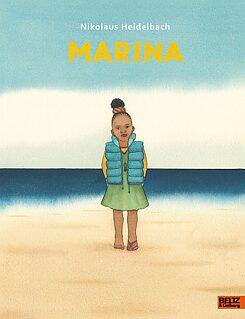 © Beltz & Gelberg In Marina, Nikolaus Heidelbach employs his unusual visual language full of surrealistic elements to tell the story of a dark-skinned girl whom two brothers find by the sea and take home with them. When she begins to talk about her underwater life as a sea princess, she is mocked by the older brother and disappears. It is a mysterious story that can be interpreted ambiguously and the variety of images invite us to think: Where does fantasy end, where does reality begin?

Where do we come from and where are we going? 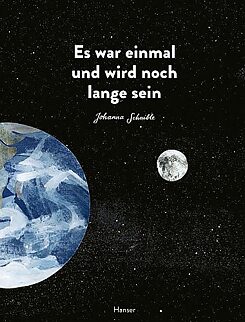 © Hanser Johanna Schaible’s picture book debut Es war einmal und wird noch lange sein (Once Upon a Time and for a Long Time to Come) is an extraordinary, very originally designed work. It is a journey through time, making the past, present and future immediately comprehensible with pages growing smaller and larger. We first learn about the formation of the earth, then dinosaurs populate the planet, humans move through deserts and over mountains, settle down and build such spectacular things as the pyramids. Finally, we get closer and closer to the present, each page shrinking in length and width by about an inch. From the middle of the book onwards, we head towards the future – right down to the questions “What do you want for your future?” and “What will you remember when you’re old?” It comes as no surprise that Schaible’s picture book was nominated for the 2022 German Children’s Literature Award. The jury explains, “Perfectly reconciling content and form, this picture book overwhelms one with awe. An ingenious concept of page sizes and formats frames the journey into the past, present and future. ... The watercolour and acrylic pictures, variously designed, collaged and layered, are fascinating in their skilful interplay of colours, textures and structures. This is picture book art that exhausts all possibilities to the finest.” 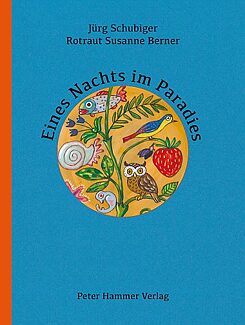 © Peter Hammer A short story was found in Jürg Schubiger’s estate, which Rotraut Susanne Berner has now illustrated and published as a picture book. Eines Nachts im Paradies (One Night in Paradise) also begins at the beginning of our history, with Adam and Eve, literally. At the beginning, the two lie on a cushion of moss and gaze at the starry sky. While Adam is content that there are countless stars, Eve wants to know exactly how many and to count them. She begins to think and ask questions about eternity and paradise. Eva is even tired of where she lives: “Always this paradise, these kangaroos, these wildebeests and cockatoos. It’s like living in a zoo.” Angered, Adam berates her as ungrateful and makes her cry. But when he discovers how to console Eve, their real love story begins. Rotraut Susanne Berner paints true-to-life colourful pictures to accompany Jürg Schubiger’s story. The animal world of Africa wanders through this wonderful and philosophical picture book, which is not just for children.

A picture book work of art 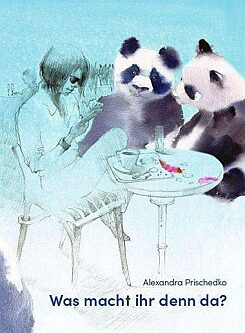 © Edition Bracklo “Today I want to go to the zoo. Bright signposts show me where to go,” little Sophie says in this book by artist Alexandra Prischedko, who was born in 1989 in Zhitomir, Ukraine and has long lived in Germany. And while Sophie wanders full of anticipation through the city, she sees countless pictures that cover all the grey in bright watercolours. Suddenly the whole city is a zoo. Two panda bears, for example, sit at a café table and wonder why the young woman next to them stares into the small flat object in her hand and doesn’t even notice her table neighbours. Prischedko’s Was macht ihr denn da? (What are You Doing?) is a genuine work of art in a picture book merging fantasy and reality.