Reinhard Kaiser-Mühlecker’s new novel is again about rural life – existential and without any country clichés. 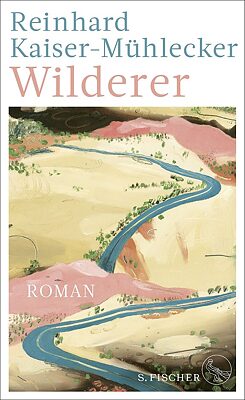 © S. Fischer It’s clear from the start that this is not some idyllic country romance. Early in the morning, a young farmer sits down, takes his deceased grandfather’s revolver out of the nightstand drawer and plays Russian roulette. This “game” has become a ritual for him. Redemption is denied him, against all the odds. “It was basically impossible, as impossible as if, no matter how many times you rolled the dice you never threw a six, or a one, never a certain number, never the one you were waiting for.”

But when you pick up a book by Reinhard Kaiser-Mühlecker you don’t expect a rural utopia. The Austrian author became known for his multiple award-winning novels about archaic-seeming rural life worlds.

In his new novel Wilderer, Jakob is the taciturn protagonist who has been running his parents’ farm for a long time, but never receives the recognition he had hoped for, especially from his oddball father. Readers who have read Fremde Seele, dunkler Wald (2016) will already know Jakob, the character who tried to break away from the farm and start a family. In Wilderer he’s again living on his parents’ farm. The situation is again anything but idyllic, with traffic speeding day and night over a motorway bridge above the farm.

Not just animals can revert to a wild state

Jakob’s daily routine is monotonous. He sleeps little, works a lot, and in the evening, he numbs himself with beer, “a pastime that had a pleasant effect.” Occasionally he looks through the same old portraits of women on the Tinder dating app. He was conned once, so no longer likes any of these “sluts.” It’s a dreary, tedious life. He barely gets by. An attempt to make some money by installing fish ponds fails. He can’t rely on his father Bert, who disappears again and again, sometimes for days at a time. And his grandmother threatens to leave her fortune to a “right-wing party.” His dog is his only faithful companion, but also betrays Jakob by disobeying and starting to kill game. This onset of uncontrollable animalism is not alien to Jakob, yet – or therefore – the animal must be punished.

Then a city dweller shows up in the nearby village. Katja, a struggling artist, has been awarded a grant. She meets Jakob, who helps out with odd jobs in the community. She takes a liking to him and to the idea of modernising the farm. After some initial reluctance towards this “time thief,” he realises that she too can work hard and contribute new ideas that not only hold water, but are successful. They marry, have a son, and the farm, which has meanwhile converted to organic farming, is named Farm of the Year. Jakob is suddenly a wealthy and respected man. All doubts seem to have vanished.

But the reader suspects that this happiness will not last. Although he loves Katja, Jakob remains suspicious, thinking perhaps she just wants to “encroach ... on this unfamiliar way of life so that she can later say she once had one of those too,” he speculates. The renewed failure is not explained in detail in the narrative, but nevertheless credible due to the skill of Kaiser-Mühlecker.

Kaiser-Mühlecker has once again created very quiet, yet grand literature. He expertly relates subliminal emotions. Little needs to be said, yet between the lines one senses the mistrust and aggression fermenting in Jakob. The plot culminates in a bizarre act of violence towards the end, when another dog also begins to revert to a wild state. Only this much can be revealed: It isn’t agreeable in man or beast. But even as Jakob’s life changes yet again, he comes to an insight that, for all its bleakness, reassures him: “There was no winning, there was no failing, there was only this road.”