A spectre is looming and not only in Europe: the fear of inflation. It helps to look at the past for information and reassurance. 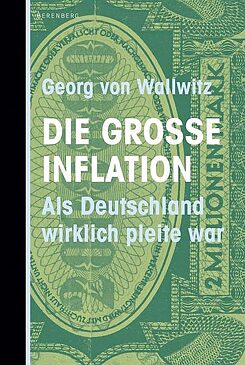 © Berenberg Georg von Wallwitz is a fund manager and co-owner of an asset management company. He’s also written several non-fiction books that explain complex economic and financial contexts in a way that is easy for non-professionals to read and understand. Most recently, he wrote a book about Die große Inflation (The Hyperinflation), “when Germany was genuinely broke.” According to the author, as the subtitle implies, that historical event, culminating in hyperinflation in 1923 and resulting in a currency reform, cannot be compared with today’s inflationary trends.

But the hyperinflation of 1923 is deeply etched in Germans’ collective memory and has dominated theories and practices in financial policy in Germany ever since. Growing inflation is now once again a dominant economic policy issue. Rising prices not only trigger feelings of insecurity in this country, but sometimes even alarmism and panic. At present, fears of inflation are being intensified by low or even negative interest rates, so that many people with conventional savings accounts fear they will virtually be dispossessed or at least will have to accept significant losses. In Germany, to a greater degree than in other countries, the need for security in financial matters is particularly high.

BETTER A LAUNDRY BASKET THAN A pile OF cash

According to Wallwitz, historical images of people carrying vast quantities of almost worthless banknotes in laundry baskets to the shops are still relevant. He illustrates this with an anecdote from that era about someone’s laundry basket being stolen from under their nose while shopping, while the thief left the pile of cash behind.

These memories of hyperinflation are partly responsible for Germany’s insistence on austerity in fiscal policy. German financial policymakers always aim to break even. During the euro crisis after 2009, European partners learned how strongly Germany insisted on budget consolidation in the affected states by means of the so-called debt brake and opposed joint risk hedging through euro bonds.

According to Wallwitz, however, Germans’ harrowing fear of inflation is based on a collective error: The facts are remembered incorrectly. Most associate the devaluation of money at that time with extreme unemployment and the rise of the Nazis.

In fact, however, the unemployment figures in 1923 were quite low as were the Nazi’s election victories. This only changed at the end of the 1920s during the world economic crisis when a growing deflation, or fall in prices, paralysed economic production, more and more people were laid off and the Nazis’ promises finally – and with fatal consequences – led to their rise to power.

At the end of the book, Wallwitz takes a look into the future. He doesn’t rule out inflation, but he notes that every period of inflation is different and that the extreme economic conditions that prevailed after the First World War are not comparable to those of today. Inflation is not least a political phenomenon, which is why it is difficult to predict with macroeconomic models alone. “The next inflation will come from a direction no one expects.” These words make it hard not to think of the war in Ukraine and the resulting commodity bottlenecks that are currently driving up prices. 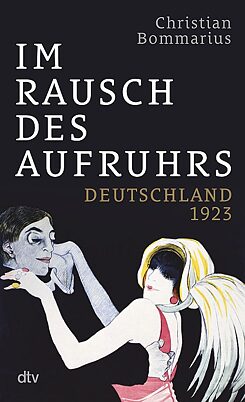 © dtv For those who’d prefer to read a more cultural historical approach to that critical year of the short-lived Weimar Republic, we recommend Christian Bommarius’s Im Rausch des Aufruhrs. Deutschland 1923 (In the Throes of Turmoil. Germany 1923). It summarises, in chronological order from January to December, the experiences and records of dozens of well-known people of the time.

The focus of the book is on Berlin’s artistic and intellectual milieu. It is not a political overview, but contains numerous sparkling details collected from newspapers, autobiographies and diaries that Bommarius found in various archives. The result is as complex as those times. “Bommarius manages to do both in this book: He describes the range of the chaos of everyone’s lives as well as of each individual. And he shows the whole movie in – although I haven’t counted them – certainly more than a hundred individual shots,” raves Arno Widmann in the Frankfurter Rundschau. 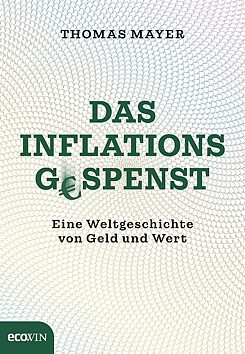 © Ecowin In Das Inflationsgespenst (The Spectre of Inflation), Thomas Mayer examines historical as well as current devaluations of money. Mayer once work for the IMF in Washington, later for Goldman Sachs in London, was then chief economist at Deutsche Bank and now heads the Flossbach von Storch Research Institute in Cologne. Mayer takes a critical view of what he sees as overly reckless lending by banks and the support of this practice by central banks. In his book, he first offers a global history of money from the Romans to the middle of the 20th century. According to it, money or currency crashes are more the rule than the exception. He then turns to the financial and monetary crises of the present. The FAZ  finds Mayer’s book “utterly pessimistic.”