Annekathrin Kohout Figure of fun becomes force to be reckoned with

Once regarded as fuddy-duddy freaks, nerds are social figures from pop culture whose social success may soon lead to their decline, says cultural scientist Annekathrin Kohout. 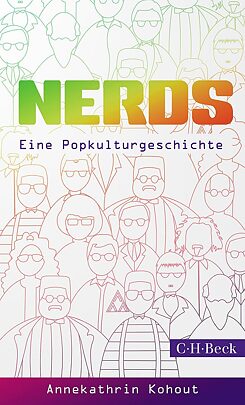 © C.H. Beck Who doesn’t know them? Classmates, colleagues or acquaintances (yes, mostly men), who have a special talent or non-mainstream interest, usually in the field of technology, have problems relating to the opposite sex (if they even recognise its existence), and generally play the role of outsiders. For decades, people have tended to label such loners “nerds”.

This year saw the publication of the book Nerds. Eine Popkulturgeschichte (Nerds. A Pop Culture History) by cultural scientist Annekathrin Kohout. And where does the term come from? From American pop culture, of course. “From the late 1960s, at least one nerd can be identified in nearly every film or series for teenagers, and from the 1970s, these figures are often referred to as nerds.“

Kohout defines the nerd as a social figure. This term derives from the social sciences and dates back to a book by Stephan Moebius and Markus Schroer published in 2010 entitled Diven, Hacker, Spekulanten. Sozialfiguren der Gegenwart. (Divas, Hackers, Speculators. Contemporary Social Figures). In it, they present nerds as social figures, “time-bound historical characters who enable a specific view to be taken of contemporary society.“ This is precisely what Kohout aims to do in her book: to show the historical development of nerds, but also their time-bound nature and possibly also the process of their decline. A social figure offers a basis for identity. In contrast to social roles attributed to certain social spheres, social figures, while often also coming from a certain area, can leave “their established field … to wander through the whole of society“.

In Kohout’s view, nerds left their established areas (computing and technology, comics and games) long ago and now appear in a wide array of contexts. Nerds are no longer just a figure of fun, but are also celebrated, for example in the now popular Nerd Nites, in which presenters regale their audiences with their specialist knowledge – the weirder the better. Yet such diversification can threaten the social figure’s very existence, says Kohout: “At the same time, a social figure loses its social diagnostic relevance when used in ever more inflationary manner.“

Revenge of the nerds

In each chapter, Kohout adds new facets to the nerd. Representations of nerds express anti-intellectualism and technoscepticism, sometimes subtly, sometimes less so. In the film comedy The Nutty Professor (1963), Jerry Lewis embodied the ideal type of the dorky, nerdy professor. Films such as Revenge of the Nerds (1985) popularised the story of the nerd’s advancement from “outsider to high flyer“ and this popularity peaked in admiration for successful nerds such as Bill Gates, Steve Jobs and Mark Zuckerberg. While they may still serve the cliché of nerds, they no longer have the status of technophile sociopaths verging on autism, are regarded as geniuses, and seen by their admirers as saviours. For their critics, of course, this sets all the alarm bells ringing.

In another chapter, Kohout takes us on an excursion into Silicon Valley, a “nerds’ Garden of Eden“. There is a flip side to this paradise, however, as you realise when reading novels such as Douglas Coupland‘s Microserfs (1995) or Dave Eggers’ The Circle (2013). Kohout thus concludes that, from the start, Silicon Valley’s Utopian visions ignored another American West Coast reality – “racism, poverty and environmental destruction.“

No longer more than a mainstream identity icon?

Finally, Kohout discusses the “privileged nerd,” who is “male, white and heterosexual.” Citing numerous sitcoms, she does find a few female nerds (most, unfortunately, in ugly duckling roles) or black nerds (the best known is probably the character Steve Urkel played by Jaleel White in Family Matters), but sees these characters as failing to muster any emancipatory energy. Her comment that the nerd figure fails to become more diverse in terms of gender and ethnicity is something of an oxymoron, however. After all, diversification of the nerd figure would inevitably go hand in hand with cultural appropriation, which in turn would be branded by critics as “blacks adapting to white culture.“

In the last chapters, Kohout takes a look at nerds as a “mass phenomenon” that has hit the fashion world in the form of “nerd chic”, making nerds a hip identity icon. She sees this advancement into the mainstream as harbouring the risk that the nerd as a social figure may be watered down beyond recognition, degenerating into mere caricature, and possibly leading to its demise. She provides evidence of the existence of widely divergent societal evaluations of the nerd figure in the fact that the term may be used to refer both YouTuber Rezo and CDU politician Philipp Amthor. While the former is regarded as cool and casual, however, the latter is seen as a classic petit-bourgeois nerd and very uncool – or worse still – someone who would like to be perceived as cool.

Overall, Kohout gives a clear description of the rise, development and imminent demise of the nerd figure. Thanks to the film directory at the end of the book, readers can find out more about the many films and series referred to and perhaps view them from a different angle - again or for the first time. Admittedly, that would mean quite a few long movie nights.