The summer holiday season is here and new audiobooks about our closest relatives and animal companions are a great way to make long journeys from home to your holiday destination seem shorter. 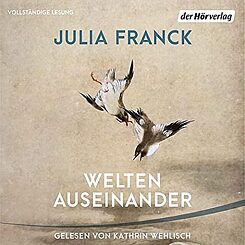 © Der Hörverlag Audiobooks on the subject of family appeal to everyone in some way or other, and trigger all sorts of different feelings. Fateful family stories set against the backdrop of the German-German past have often been a subject of Julia Franck’s novels in the past, and she takes up this motif again in Welten auseinander (Worlds Apart). She presents the life of her protagonist, Julia, who is taken with her mother and sisters from East Berlin to Marienfelde refugee camp. After moving on a few times, Julia returns to Berlin, this time to the West. She finds a job, takes her university entrance qualification exams, encounters her father and meets the love of her life. This autobiographical exploration with its momentous twists and turns is empathetically narrated by Kathrin Wehlisch in a rendering commended by the WDR for its warmth and sympathy and for the fact that, despite the ups and downs of life presented in the story, neither author nor narrator descend into pathos. 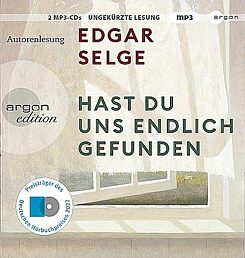 © Argon At the age of more than 70, the well-known theatre, film and television actor Edgar Selge presents his highly-commended literary debut - an autofictional novel as an unabridged audiobook narrated by himself. In Hast du uns endlich gefunden (So you finally found us), Selge takes a sensitive, reflective and open look back on his childhood in a small town in eastern Westphalia. His father was a prison director with keen musical ambitions, his mother a woman disappointed by life. Two brothers died young. The family continued to hold antisemitic views, common in many German families in the fifties and sixties, and “education“ involved a variety of forms of paternal violence. This work reached number two on the hr2 audiobooks bestseller list in December 2021. Selge reads "with fine literary intuition and sometimes bitter humour, but also with a voice that marvels at the effects of this childhood right up to the present.” Winner of the German Audiobook Award 2022 in the "Best Male Narrator" category. 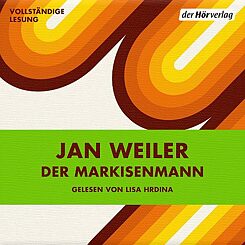 © Der Hörverlag The popular writer and journalist Jan Weiler entertains his audience with novels, columns, screenplays and audiobooks. His coming-of-age story Der Markisenmann (The Sunblind Man) takes us to the rather unglamourous world of door-to-door sales. Kim, aged 15, is packed off by her mother to spend the summer holidays with her father, whom she has never seen before. She accepts her fate, helps the unsuccessful sales representative to get rid of his ugly sunblinds, and meets weird and wonderful people who work in a scrapyard, car repair workshop and dodgy pub. But most importantly, the father-daughter relationship develops in a previously unknown way. Berlin actress Lisa Hrdina reads this entertaining audiobook about growing up and family secrets. 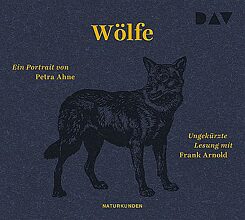 © Der Audio Verlag The wolf appears in a multitude of fairy tales and sagas as a frightfully dangerous animal, and spreads fear and terror among famers and forest walkers in real country life, too. In Wölfe (Wolves), part of the highly-commended Naturkunden series edited by writer Judith Schalansky, science journalist Petra Ahne devotes herself to an animal that arouses a lot of emotion – a very social creature, as the book shows. Frank Arnold, actor, dramaturge, director and, in particular, narrator of many audiobooks, reads this sensitive animal portrait, accompanied by the evocative howling of wolves. 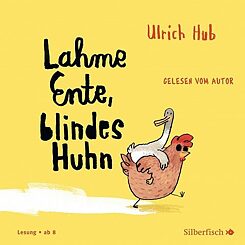 Silberfisch When a lame duck meets a blind hen on the road while looking for the magical place where dreams come true, all sorts of adventures are bound to happen. These handicapped fowl have a successful journey because they complement one another perfectly as they cheerfully travel the world, sometimes with cheek and imagination. Lahme Ente, blindes Huhn (Lame Duck, Blind Hen) is a lovely uplifting listen for anyone aged eight to 88. Ulrich Hub, a trained actor and director and author of several popular children’s books, narrates his own witty story, guaranteeing entertaining and enjoyable listening. 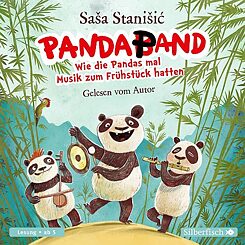 © Silberfisch Author Saša Stanišić, who has won numerous awards (including the German Book Prize for Herkunft / Where You Come From), has turned his hand to children’s books, and seized the opportunity to narrate his Panda-Pand: Wie die Pandas mal Musik zum Frühstück hatten (Panda-Pand. How the pandas once had music for breakfast). A quirky story in which a panda called Not-Peter discovers while nibbling his breakfast that his favourite food, bamboo, makes sounds when you blow into it, though not exactly the world’s most beautiful melody. Before long, the panda’s friend Not-Gerhard and punk panda Not-Olivia join in the music. The pandas rock through the bamboo forest – an untuneful affair that does not please all the other pandas … “A firework display of ideas” (hr2), including issues vital for survival, such as protecting endangered species and the environment, presented in a way children can understand. Audiobooks do not get better than this.