In her debut novel, Annika Büsing tells an unusual and pleasantly kitsch-free love story set in the Ruhr region on the fringes of our affluent and feel-good society. 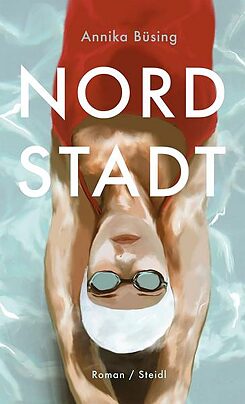 © Steidl In the Ruhr region, the poorer, socially disadvantaged sections of the population often live in the northern districts. In this respect, the title of Annika Büsing’s debut novel Nordstadt is already a socio-political statement. “We were infuriatingly asocial and infuriatingly poor,” says the main character and first-person narrator Nene of herself, her family, her social milieu. Nene is in her early twenties. She only found out that she had a thirteen-year older half-sister named Alma when she started school.

A swimming pool on the outskirts of town has been Nene’s home for a long time. It’s where she learns to swim and trains, it’s where she has her first orgasm in a changing room, and it’s where she now works as a lifeguard and watches the pensioners swim their laps. One day, Boris, who has mobility problems, shows up at the pool. Nene is the only lifeguard who lends him one of the swimming boards, although they are actually only meant for the swimming school.

She is attracted to his type. His fierce eyes remind her of a puma, which she also likes. Unemployed Boris is injured and vulnerable: His disability is the result of polio in early childhood, his mother is an opponent of vaccination, the mother-son relationship is strained as a result. But pity is beneath him. In view of the warnings on cigarette packets, he asks: “Why don’t they put that on water bottles, on toast packets, on toilet paper? Why doesn’t it say ‘Living Kills’?” Nene also likes that he gets to the gist of things. His statements are often very simple, but he is smart and brave: “And most people are not brave. Most people say ... ‘uneducated’ when they mean stupid.”

Both share the experience of childhood crises in a socially precarious milieu. Nene doesn’t want pity either, she wants “a new life. But no one can give you that ... because there’s no cure for shit poverty, shit addiction and shit violence.” Nene knows all about that. The money for a school trip comes “from the council.” When Nene’s mother died, she was eight years old. “And I was already pretty broken for eight. Her father drinks and beats her. At times she lives in a home or with her half-sister Alma. At the age of seventeen she is raped, but she doesn’t want to hold the perpetrator to account. “I just want to forget,” is her standard reply when her friend asks her if she doesn’t want to do anything about it.

It’s difficult for Boris to allow people to get close to him. He’s suspicious, sceptical. “Will this last through the winter?” he asks. Nene finds the question pathetic and heartless at the same time. Boris calls her “my girl.” She doesn’t like it, but he’s not fazed. “He can be nasty. Especially when he’s having a bad day,” Nene says. And bad days are not rare in Boris’ life.

Büsing tells of Nene and Boris’ difficulties becoming closer in a sensitive but also coarse tone. Her style is concise – and a saying by Nene’s German teacher applies to Büsing: “Conciseness ... is a special form of intelligence.” The plot is not told chronologically; Büsing jumps back and forth in time again and again. Thus, the short but impressive novel begins with a flashback to the love story that follows. This is convincing both in terms of composition and content, because despite strong forces of attraction, the burdened past of the two main characters creates equally strong centrifugal forces.

In the social milieu in which the novel is set, happiness is usually the happiness of others. There is no simple happy ending for Nele and Boris. But at least there is the realisation that if there is no moment in the past “when everything was good and whole,” there is at least nothing left to lose in the present.