Jan Costin Wagner’s new crime novel about a paedophile ring is based on real events. The result is a dense mesh of voices. 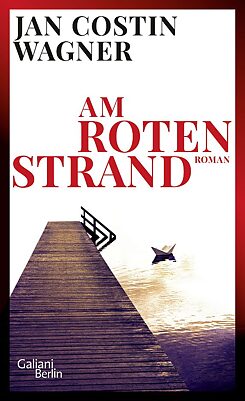 © Galiani Berlin In Jan Costin Wagner’s second novel featuring Wiesbaden detectives Ben Neven and Christian Sandner, the focus is on a paedophile ring, which was also the subject of their investigations in their first case in Sommer bei Nacht (Summer at Night) (2020). The book’s title Am roten Strand (On the Red Beach) suggests an idyllic holiday, but behind the façade of a lakeside campsite, a small group of men led by an IT expert are performing horrific paedophile acts. Wagner’s choice of setting alludes to two well-known abuse cases in Germany – one of child abuse at a campsite in Lügde, North Rhine-Westphalia, which came to light in 2019, the other a case of abuse in an allotment garden summerhouse in Münster in 2020, where the main culprit was an IT specialist.

Ben Neven and Christian Sandner work in the “Crimes against human beings” department. Ben comes under pressure himself during an internal police investigation into his fatal shooting of a man who was intending to kill an innocent boy and bury him in a clearing in the forest. But it cannot be established that Ben acted punishably.

The delicate matter in Wagner’s new crime series is that this very same investigator, Ben Neven, is himself a father struggling with his own paedophile predilection. It’s a losing battle, since his job involves looking at pornographic photographs and videos of children. His colleague Christian Sandner also has a troubled history. He lives with Anne, who was abused as a child and has closer associations with the new case than he would like.

Things become even more delicate when two potential perpetrators are killed within a short space of time, and the police also have to investigate these cases and protect perpetrators from their victims’ revenge. As a result, the blurring of the boundaries between perpetrators, victims and investigators reaches entirely new dimensions.

In connection with the murder of the two perpetrators, Anne presents her view of what it is all about: “Perpetrators become victims. The intention is to make them lose the most important thing.“ And from victims’ point of view, the most important thing is control. The experience inflicted on their bodies and souls has made them painfully aware that control is power. Never again do they want to be powerless. And if the state fails to act, the only option is to take the law into your own hands.

In many short chapters, each headed by the name of the character involved, Wagner gives an insight into the mindsets of the two detectives, the perpetrators and the victims. A few chapters are also dedicated to Ben’s mentor, the retired detective Landmann, who is consumed by grief following the loss of his daughter to suicide.

Wagner does not indulge in sensationalism, telling the story in a distanced manner and calm tone, yet empathetically. Abundant perspectives and the many narrative strands are challenging but not overwhelming, giving the novel myriad layers. All is not well at the end, even though the story ends with a big bang. There is no prospect of any respite for anyone. While Ben sends his daughter to bed with soothing words, he is thinking, “A good lie, that is.“