Philipp Böhm has written a literarily coherent and surprising collection of short stories. There are stories about mountains of grease, an Elvis impersonator and diplomat hunts. 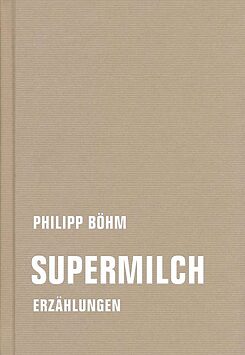 © Verbrecher Schellenmann (2019), the debut novel by Philipp Böhm, who was born in Ludwigshafen in 1988 and now lives in Berlin, has been described as idiosyncratic. “The clever and allusive text holds a great deal in store for the reader in its open form; a literarily quite daring undertaking has succeeded. Schellenmann is the impressive debut of a very ambitious young author,” wrote Martin Gaiser for literaturkritik.de.

Now Böhm has published a collection of short stories, Supermilch. The stories it contains are no less idiosyncratic. Seemingly everyday scenarios collapse into the grotesque, the drastic and the dystopian.

In the first story, for example, Böhm describes the brave new world of work in an online marketing agency, with all the vacuous, never-ending meetings we’re all familiar with. “Everyone goes out of their way to look particularly busy,” it says. Everyday life is characterised by motivational pressures and esoteric odds and ends, such as a gong that is struck after each sale closes. But behind these façades, desperation reigns; a desperation that leads the doubting first-person narrator to write an e-mail to Jeff Bezos, because he supposedly reads all e-mails, or at least claims to.

In the next story we dive into the real, reeking underworld. There, a sewer worker named Achill and his co-workers toil their way around a huge mountain of grease blocking the sewer system. Through a scene in a documentary film, Achill becomes an internet meme. Now Mady, a young artist, accompanies the crew to photograph the workers. Of course, the worlds clash. “She’ll be somewhere giving a nice little talk and reciting nice little sentences, and we’ll still be down here,” says Achill’s colleague Rocko. And what does Achill, the stoic sewer-cleaning shaman and “grease whisperer,” think? When Mady asks him whether he doesn’t expect something great to happen in his life, like it’s promised everywhere, he just replies, “They’re lies, but it doesn’t matter.”

what happens after Internet fame?

The stories continue on their confusing and multi-layered way. “Unser Flecken” (Our Spot) is about well-off city dwellers who want to slow down and move to the countryside to find themselves there. But then, out of nowhere, eerie boxes appear. One night, the children of the village form lines standing silently and motionlessly in the field between the boxes. As if sleepwalking, the first-person narrator approaches one of the boxes.

An Elvis impersonator also makes his appearance – or more precisely, his last YouTube appearance. Which raises the question of what happens after short-lived Internet fame. How does a YouTube star age? Then we read about a woman who seeks contact with her deceased grandmother in the beta phase of a dubious project. And about young people who regularly go hunting for people or diplomats.

“None of us asks how we became like this,” is the first sentence of the first story. With Supermilch, Böhm has presented such realistic and at the same time surreal to dystopian narratives that readers are forced to confront reality and accept nothing as clearly given.