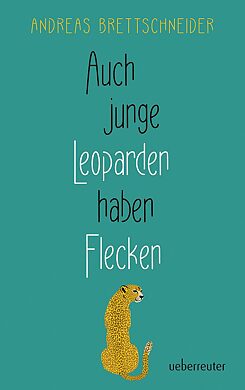 © Ueberreuter Hafun, a fishing village on Somalia‘s north-east coast. Only bycatch from big high-sea fishing vessels is washed ashore here. The local population subsists on “what they don’t need in Europe“. Three ships run aground lie like memorials on a sandbank. The children call them “the three big dead ones“. That is how Andrea Brettschneider‘s debut young adult novel Auch junge Leoparden haben Flecken (Even Young Leopards Have Spots) begins.

With his little sister Amina, 15-yerar-old Geedi experiences his parents’ sadness. A long time ago, his older brother Aayan joined the pirates off the Somali coast and they have not heard from him since. Not wanting to lose his second son too, Geedi’s father makes him promise never to follow the pirates‘ alluring call. While people often say Geedi has his head in the clouds, he clearly sees that his little sister is disadvantaged in not being allowed to go to school although she is cleverer than he is.

Geedi has clairvoyant abilities. When one of the shipwrecked vessels disappears overnight, he foresees his brother’s return in a daydream. A week later, Aayan does indeed come home, bringing with him a gold watch and valuable rings. He recounts adventures unmatchable by the tales of the elderly villagers. Shortly afterwards, when a pickup truck comes at night to collect him, Geedi hides in the back and goes with him.

Although Aayan wants to send his little brother back at first, he stays and even proves himself useful. It turns out that Geedi is not alone in being clairvoyant - Aayan is too. So Geedi soon becomes a real pirate, is allowed to take part in the planning and even in raids, if only on the pirates’ mother ship.

A right life within a wrong one?

Arriving at the pirate camp, Geedi realises that his brother is none other than pirate boss Nidar, known colloquially as the “Ghost of Aden“. He is a kind of Robin Hood, who, unlike his unscrupulous rival Dayax, earns his money with robberies rather than hostage-taking. He distributes some of the stolen money from his raids among the impoverished villagers. At the same time, he debunks Geedi’s initially overly romantic notions about piracy: “In Somalia, we’re all pirates. You don’t need to have a ship.... As a child of Somalia, it’s your fate to always do wrong even though it’s right.“ On the one hand, it’s wrong to be a pirate and steal from others, but on the other it’s right to get back something from those who stole the Somalis’ future. Of course, that raises moral questions. Can an action be wrong in general, but right in a particular case? Is there a right life in a wrong one in spite of everything?

Brettschneider not only succeeds in writing an exciting adventure novel, with twists and turns that show that piracy is a brutal and deadly business. He also tells of the lack of perspective and poverty that make people in Somalia and elsewhere turn to crime. A situation for which the Western world is at least partly responsible.

This text was first published in a slightly different form in the Süddeutsche Zeitung.