Paulina Stulin Exercises in Tolerance on the Lawn

Summer, sun, swimming pools – these things belong together. While the water offers a welcome cool-down, poolside, social conflicts continue to smoulder and heads remain hot. In her graphic novel, Paulina Stulin captures the microcosm of the summer swimming pool in a colourful and lively way – happy ending not excluded. 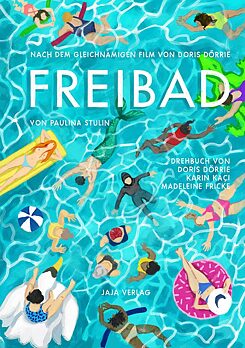 © Jaja Verlag This year’s Munich Film Festival featured the new film by the successful director Doris Dörrie. But before Freibad is released in German cinemas in September 2022 – almost at the end of the bathing season –, the award-winning graphic artist Paulina Stulin has presented a graphic version of the screenplay under the same title, comprising almost 300 pages, at the suggestion of Doris Dörrie herself. In an interview, the director confesses that for her it would have “incredible added value ... to be able to re-read a story in a graphic novel, where there’s a completely different connection between image and words and I, as a reader, can sort out and define it for myself in a completely different way.”

What is this book about? Its summery cover is refreshing and it takes place exclusively in a women’s outdoor pool – presumably modelled on Loretto women’s pool in Freiburg im Breisgau, the only such pool in all of Germany. Paulina Stulin succinctly sums up the content herself in an interview on the publisher’s website: “The plot centres on the themes of headscarves, dealing with the female body in our society, self-determination and solidarity among women.” All of it tough to chew and potentially explosive. But readers shouldn’t be overwhelmed or weighed down by them. “When we first talked about this project, Doris told me that serious matters like these could only be treated properly in a comedy,” says Stulin on the intended tone.
The story launches full of action: a police operation in the women’s domain, a “broad brawl” has been reported. In the search by the authorities – all men – for the perpetrators, all the female protagonists gradually come into view: Cashier and lifeguard, Turkish family clan and aging pop singer, veiled women from Saudi Arabia and topless bathers. The police soon leave, but the conflicts remain – a burkini, for example, causes a major uproar not only among two white-skinned ladies in deck chairs, but also in the Turkish mother of the wearer of the full-body suit. The regulars, in turn, switch back and forth in their dialogues between feminist avowals and resentments with racist overtones. When a group of fully veiled women appears, the fronts change once again.

Paulina Stulin grounds her book in radiant summer colours: The sky and water are bluer than blue, the sunbathing lawn glows lush green. Less idyllic is what repeatedly plays out in the women’s faces – anger, disappointment, annoyance, incomprehension: Stulin expertly depicts shifting, telling facial expressions. Because she often closes in on her characters, every emotion is immediately communicated, making the story seem tremendously alive. The impression is reinforced by the rapid jumping back and forth within the limited grounds of the swimming pool. We observe a conversation at the kiosk, then move about with the lifeguard, to later listen in on an argument at the edge of the pool. The dialogues in the speech bubbles are fast, incisive, sometimes aim below the belt and time and again they are also very funny.

Running away to come back again

All in all, the women at the swimming pool have little to offer one another. At some point, the lifeguard quits and a man is hired in her place, which leads to even more turmoil. Many of the protagonists run away in a rage – only to return at the end somewhat chastened. Then the mother of the burkini wearer has finally learned to swim, all agree that the new vegan sausages taste awful and the temporary lifeguard is allowed to sit decoratively costumed at the door for the reopening. A conciliatory conclusion to a seriously enjoyable social study, vividly and stirringly illustrated, which can be leafed through in an afternoon on a bath towel, but whose themes have an impact beyond the last beautiful day of summer.