The main character in Sybille Ruge’s debut novel is a brash investigator with her own collection agency. Survival is not a problem; it’s merely as question of how. 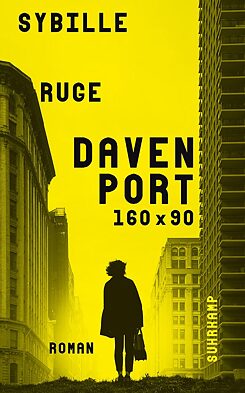 © Suhrkamp Sonja Slanski is tough. She runs a collection agency with a fake diploma on the wall. True to the motto “scruples are for beginners,” she lives and works in the financial metropolis of Frankfurt am Main. At the funeral of her biological father, whom she never knew, she wears a tank top, sweatpants and high heels in black – all items were “carefully chosen,” as the reader is informed. It quickly becomes clear that nothing is normal in Sybille Ruge’s novel Davenport 160 x 90, especially not the private investigator with her somewhat different methods and views, a growing number of scars and a penchant for vodka and the odd pill. Thanks to her wealthy Russian foster father, she has enough financial means, owns a loft and tips generously where needed. Full of self-confidence and insolence, she doles out criticism of capitalism:

“Quickly picking up his Montblanc, attorney Hoffer’s wrist was exposed to reveal a watch visible the size of a baby bottom cream jar. I definitely suspected he had hypertension. Probably a conservative family man with repressed urges and liberal ideas. Bread for the third world, but the good silver stays at home.”

Among her many problems – Slanski mentions a “messed-up childhood” – she also carries around a commitment problem, but has a married lover. All this, written from the main character’s point of view, is fun, challenging. Ideas come and events move at an often-ripping pace, the language is not always easy. Sometimes it all seems a bit forced, deliberate, but it doesn’t detract from the reading pleasure.

The case itself is not at all the focus; it’s the private investigator’s approach that gives the story its meaning. We don’t want to give too much away, just this much: There is a dead woman (or was Slanski herself the murderer’s intended victim?), an actual perpetrator and a good-looking inspector the PI feels sexually attracted to. The reader has high hopes for the relationship, but unfortunately, she stands in her own way. Extreme, almost pornographic, art and the avant-garde, drugs and a corrupt law firm: That and much more awaits readers in Davenport 160 x 90.

In many ways, the book is thrilling, but it’s not a classic crime novel. Sybille Ruge’s first novel is fast-paced, contemporary literature. The author was an actor, is a poet, costume and fabric designer, works in Frankfurt and lives in Switzerland. According to the blurb, she loves space travel, sociology and the work of Heiner Mueller; an extravagant blend that’s resulted in a book worth reading!