Alcohol is no solution, as everyone knows. In her new novel, Christine Koschmieder comes to terms with many things she has had to cope with in the course of her life. And she writes about the destructiveness of the people’s drug number one. 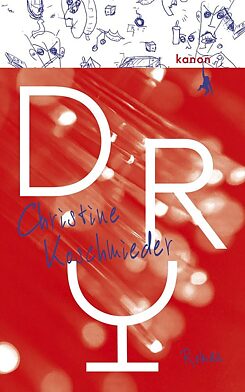 © Kanon “Why didn’t anyone notice?“ asks Karl, her adult son. Her reply: “Because I thought that was life. Because I didn’t realise how destructive it is. After all, that’s how our life was.“ As long as people keep on functioning and don’t attract negative attention, and as long as their lives don’t get out of hand, alcohol consumption is not an issue, often even when it should be. Drinking is too “normal”, a socially acceptable, sometimes expected, pleasure.

Christine Koschmieder‘s novel Dry deals with the subject of alcohol (addiction), approaching it from a number of different angles. The book is clearly autobiographical, although she includes a reservation at the outset: “Dry is my story, but not necessarily the story of those who feature in it. Or at least not those who would have told it … Dry is a novel, not a memoir or work of non-fiction.“

The woman who is my mother

For Koschmieder, of course, alcohol is not a solution or even the main problem. The focus is not on alcohol and its effects. The story is told very much in passing as something that happened to the first-person narrator during all the challenges known as life. First, it is about when she was a young adult, breaking away from the parental home, first love affairs, her first two children, the love of her life, her beloved husband’s death from cancer, and a third child with a new partner.

The book is in three parts. In the first, Koschmieder writes about her adult life, how “brighter” turned “darker“. Her husband’s death is followed by a “grey zone“ in which life goes on, has to go on. In part two, the author discusses her background and childhood. Her father is an alcoholic and his half of the bed “exudes a musty smell. Bad breath caused by smoking, red wine and sleep“. Yet she has a loving relationship with him and something he passed on to her was “not to follow the crowd out of complaisance”.

Her loveless mother constantly reproaches her, resulting in a very distanced relationship. After her parents‘ divorce, contact to her mother breaks off and the two pubescent daughters move to a new home with their father. When the narrator approaches her mother again after seventeen years, she refers to her with rigorous distance as the “woman who is my mother“. The daughter only becomes physically closer to this extremely closed-off women after her death “when she finally allows herself to be touched“.

Finally, the last part of the novel is dedicated to the narrator’s stay in hospital, where she is admitted at her own request. She has to share a room with Alex, a muscular young woman with tattoos, who initially scares here. But when Alex puts a pot of primroses on the table, she is immediately “less scared of her“. She stays in hospital for 105 days – a stay Koschmieder describes as pleasantly undramatic. While at first, the protagonist has problems getting along with her roommate and develops “bomber jacket anger“, she gradually learns to become kinder to herself, and not “to deny fear and sorrow, but to endure them“. In particular, her critical self-image as a mother is adjusted at the end, reinforced by her own children: ”Mum, you always act as if everything about our family was awful and you were a bad mother. But that’s not true!“

Dry is an honest, pleasantly undramatic book, which presents – as Mithu Sanyal says in her review on WDR – “the whole buffet of life”. It has also been published as an audiobook, read by the author.