This year marked Alexander Kluge’s ninetieth birthday. Fittingly, a volume of interviews has been published, giving readable access to this brilliantly productive author and filmmaker’s fascinating world of ideas. 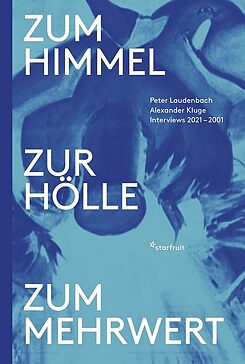 © starfruit Since the 1960s, Alexander Kluge has produced an incredible volume of films, television programmes and books. In an interview with the Tagesspiegel to mark his eightieth birthday, he said: “I’m not stylising this birthday. I’m a busy man.“ That, in a modest, friendly way, sums up his life principle. Work always comes first, it seems. That is the only way to explain his productivity.

Journalist and theatre critic Peter Laudenbach conducted a number of interviews with Kluge. In his book Zum Himmel, zur Hölle, zum Mehrwert (Heaven, Hell and Added Value), he has published nine of these interviews recorded between 2003 and 2021 and a conversation with Alexander Kluge and Christoph Schlingensief that took place in 2001.

The book illustrates an important principle in Kluge‘s thought: linking different time levels. The present cannot be understood without the past and any view into the future taken only from the position of the present is short-sighted.

In evolutionary terms, Kluge sees human beings as ”flight animals“ that need to see danger coming. That requires imagination and fantasy, qualities modern people often lack. Kluge likes to illustrate his ideas by telling anecdotes, which is what he does here. He tells of a Saxon teacher sitting in an air-raid shelter with her children in 1945, praying. But in 1929, when the Nazis won less than five percent of the votes in Saxony’s regional elections, she would have been in a position to stop Hitler. At that time, she lacked “not determination, but imagination. She cannot imagine the war – that’s why it happens.“ For Kluge, imagination needs to have a retrospective impact, for example when he cites Ernst Jünger: “But those who don’t remember massacres cultivate them.“

In another Tagesspiegel interview dating back to 2014, Kluge‘s statements sound highly relevant to the present situation: “Today I open a newspaper and read again of Crimea and Ukraine. The same place names as in 1941. An overall reality with subterranean connections.“ Kluge says of himself that he is “immune to war fever“. War is a chimera - you do not always recognise it at first sight and have a false sense of security. But even he could not imagine – and remember, this is 2014 – “that we in Europe would end up in a situation like the one in Ukraine right now“. According to Kluge, this was another situation where imagination was lacking, because “the escape routes are always 20 years before a war.“

Thus, Kluge always “digs deep in history“, as Laudenbach describes his working method in the epilogue, revealing the layers underlying the news of the day and enabling “this real reality to be defended against the current weekly events programme in the news“. The book is appropriately illustrated with pictures of elephants from Kluge’s archive. The elephant would be an appropriate heraldic animal for Kluge, due to its good memory and talent for collaboration, but also its stubbornness.

Without irritations, you are already dead

What is special about Kluge is not only his intelligence and incredible ability to make intellectual connections between apparently disparate things, but also that he neither tends towards a know-it-all attitude nor to understatement. Driven by pure curiosity, he loves “gardens of knowledge“, a term he uses to refer to universities such as Stanford and Harvard. Irritations, in the sense of uncertainties, are also something he considers vital: “If you don’t get irritated anymore, you are already dead.”

Kluge shows great leniency towards human shortcomings. He claims to be “neither a pessimist nor an optimist, but someone who observes as precisely as possible while at the same time wishing intensively“. Being human means having complex emotions and being an illusionist who, while being able to perceive realities, is far from being a realist. And the wishes arising from the feeling that everything will turn out all right are something Kluge takes just as seriously as realities that may speak against a happy outcome.

Like Kluge‘s own books, this volume of interviews is an intellectual treasure trove. The difference is that these talks provide easier, more condensed access to Kluge’s world. The condensed form leaves the reader feeling wiser and more positive. Immediately after reading, at least, one feels intellectually better equipped to deal with the often depressingly overwhelming demands of history and the present. The lesson of these interviews? “Take a good look but make a wish anyway”, perhaps.