Father-and-son stories are usually a tragic affair in literature. In his new novel, Dirk Stermann satirises this literary theme. The son is just four, his father comparatively old – and he looks a bit of the fool when a Ukrainian babysitter turns up. 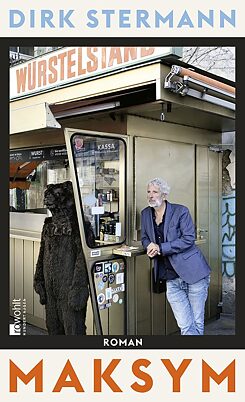 © Rowohlt Dirk Stermann was born in Duisburg in 1965, but has lived in Austria since 1988, making him one of the most Austrian Germans you can imagine. He’s even asserted himself there in a field where Austrians are quite superior to Germans: humour. Stermann does cabaret radio and has been co-hosting the ORF late-night show Willkommen Österreich with Christoph Grissemann since 2007. In his novel Sechs Österreicher unter den ersten fünf (Six Austrians in the Top Five, 2010) he celebrated his degermanisation.

The hero of his current novel Maksym is a busy German cabaret artist and writer living in Vienna named Dirk Stermann, an ageing white man who has become a father once again shortly before his fiftieth birthday. His girlfriend Nina, who has been the main caregiver of their son Hermann so far, is happy when she gets a job offer at the Austrian Cultural Forum in New York:
“‘New York,’ I murmur. ‘And how do you think we’ll manage that?’
‘The same as the last four years,’ Nina said. ‘Only in reverse.’”

Hermann doesn’t see his father, who’s always on tour, very often. His son calls him Banksy, after the British street artist no one’s seen either. Now a babysitter has to be found, because not all the gigs can be cancelled. An application from a certain Maksym stands out, who succinctly writes: “Do everything.” The applicant photo shows a bald man in a washed-out sweatshirt. “How did this Eastern butcher get on the list of well-educated girls? ... Probably he had wanted to sign up on one of those temp job websites, but because he didn’t know German, he ended up here,” the first-person narrator thinks to himself.

The first candidate is a flop: Maria from Carinthia, “the blonde version of a Bulgarian hammer thrower.” When Nina is encouraged by her friends that hiring a male babysitter would be wildly progressive, she hires Maksym.

Maksym and Hermann get along splendidly from the very beginning. The babysitter not only teaches the little one how to ride a bike, but also initiates him into martial arts. He raves about the Russian mixed martial arts fighter Khabib Abdulmanapovich Nurmagomedov, who once defeated a bear. The father has reservations at first, of course, but when he realises that Maksym has connections that are shady but also helpful to him, he suddenly sees the babysitter in a different light.
Stermann uses quite a few clichés in his novel, but he also breaks them. For example, the supposedly coarse Maksym has a photographic memory, completes a law degree with ease on the side and even helps the protagonist overcome his writer’s block in the end.

The first-person narrator also addresses his relationship with own his father, for whose recognition he struggled in vain. An anecdote from the past illustrates this: “Today: Stermann” is written on a large banner at Vienna’s prestigious Burgtheater. His parents witness his solo performance there, but after his father’s death, the son learns through his father’s diaries that he was anything but impressed: “Burgtheater sold out, but at student prices. No standing ovation.”

The Stermann in the novel mercilessly exploits his private life for his books, which tends to rile some. “You’re no Knausgård,” he’s told by his ex-wife, and, “All you have is a moth-eaten Norwegian jumper.”
And what about the relationship between fiction and reality, given the autobiographical content of this punchline-filled novel? Perhaps the (alleged) statement by the American psychoanalyst Erika Freeman from the epilogue is pertinent: “Sometimes you write about things you have experienced, sometimes about things you will experience.”