Norbert Scheuer The Latest from Urftland

Norbert Scheuer has brought out another novel in his Eifel saga. This time the focus is on an orphan girl who fights for her identity and against the silence of the village community. 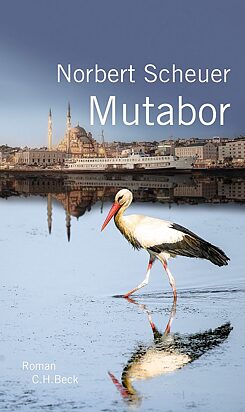 © C.H. Beck For twenty years, Norbert Scheuer has been writing novels set far from the big city; describing the world from the perspective of a small area around the town of Kall. He calls this world Urftland after the river that runs through it. In his latest novel, Mutabor, Scheuer tells the story of Nina Plisson. She was a minor character in Am Grund des Universums (2017), delivering newspapers with her handcart.

Nina is troubled by the question of her origins. What happened to her mother? Who was her father, of whom only a photograph with an unrecognisable face exists? Nina can hardly recall her early childhood. The only thing she remembers is, “When mother comes home with a man, I have to go to bed.” But the villagers remain silent.

A Greek chorus of gossiping greyheads

Nina grew up with her grandparents, who have since passed away. She loved her grandfather, who, if only in spirit and in an increasingly confused state, always took her on long journeys. One day his Opel Kapitän would take her all the way to Byzantium, where she was supposedly born in a palace. But even if only in the immediate vicinity, Nina found something she could experience regardless of location: the power of imagination, books and Greek mythology. She begins to write herself, many exercise books are full of her musings, scribbles and blotches.

It is also an escape to a better world, because, “In Urftland there is no such beautiful poetry, no gods, heroes and heroines, only people like the greyheads” who meet every morning in the cafeteria of the supermarket to gossip like “the Greek chorus in the background, commenting on everything.”

Nina’s relationship with her grandmother was quite different. Her grandmother and mother were at odds and the quarrel continued into the next generation. The grandmother, who thought she was better than her, takes out her bitterness on her granddaughter. She beats her and the child begins to detest her. As Nina gets older, she hits back. Then one day Nina finds the old woman lying on the kitchen floor. She doesn’t call for help, but flees the situation: “I leave her lying there, run back to Ravelsberg and hole up in my cow belly.” That’s her retreat: an old barrel where she abandons herself to her imagination, which takes her into the world of owls, centaurs and nymphs.

After the death of her grandparents, a few people mean well for Nina: the social worker Ignaz, the retired teacher Sophia Molitor, who takes care of the girl, who initially has difficulty reading and writing, and the Greek innkeeper Evros, in whose restaurant she helps out. Otherwise, Nina is an outsider. She suffers from epileptic seizures and experiences terrible things, such as abuse by her caregiver and a gang rape by her peers.

Scheuer interweaves reality with the world of fantasy and myth. Everything is in flux, including Nina’s self-perception; she searches for her identity beyond her bleak reality: “I have dreams in which I am sometimes a boy and then a girl again. Maybe I’m something in between; a dragonfly larva that’s evolving.”

In Scheuer’s novel, inkblots not only appear in Nina’s exercise books. Interspersed between the narrative passages are 33 pages of beermats from Evros’s tavern. On them, in addition to the mysterious illustrations designed by Scheuer’s son Erasmus, there are short texts borrowing from Greek mythology that mirror Nina’s story. According to Scheuer in the acknowledgements at the end of the novel, these beermats are intended to make comprehensible “the nested events of the stories as the result of a very idiosyncratic way of thinking... and the images in which the people acting here think as a coherent concept of coping with life.” In this second narrative thread, there is Zoe, a forgotten daughter of Medusa invented by Scheuer. Even though the function of this parallel universe is clear – creating a world beyond reality in which unrealistic desires have a place – the “beermats” leave the reader rather perplexed and unable to find the connection to the main plot. But this discrepancy is probably intentional. For myths, which the FAZ notes Scheuer explained during a reading in his hometown, “have no relation to reality.”

Never are all the stories told

There’s also a love story: Nina falls in love with Paul Arimond, the main character of Scheuer’s novel The Language of Birds (translation published 2017). At first, she only crushes on him from afar, but when Paul returns from Afghanistan badly injured, she selflessly cares for him, who is traumatised, drinking and abusive. She hopes that one day he will love her and go away with her. Paul’s condition does indeed improve, and a night of love ensues, during which the secret of Nina’s origins is revealed.

Mutabor is a poetic and enigmatic novel; not all the threads Scheuer picks up connect. The title comes from Wilhelm Hauff’s Tale of Caliph Stork, in which a caliph and a grand vizier are transformed into storks. But the two forget the magic word mutabor (Latin for “I will be transformed”), with which they could become human again. In the end, Nina learns that she can create magic words herself.

Sometimes you have to leave the place that means the whole world to you. Thus, the novel concludes with the hope that there is a better future for Nina, now of age, beyond the village community. And surely Scheuer will continue writing his Kall saga, because, as the author says, “Never are all the stories told.”