In his new novel, Swiss writer Charles Lewinsky tells the captivating story of the tragic life of an orphan who believes he is the son of the King of the French. 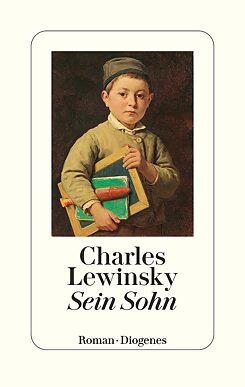 © Diogenes In the opening chapter of Charles Lewinsky‘s book Sein Sohn (His Son), two gravediggers pass the time at a paupers‘ cemetery by thinking up a life story for each corpse. It is 1832 and cholera is raging in Europe. A good time for gravediggers: “Six bodies,“ says the old gravedigger: “A good day.“

In the next chapter, Professor Moscato of Milan demonstrates the delivery of a child to his students. It is a difficult birth and the woman is screaming in pain. Moscati’s advice: “As a doctor, never let yourself be distracted.“ He calmly asks a few more question before single-handedly birthing the child. It is alive, the students applaud, and the professor bows “like an actor”.

The child, whose name is Louis Chabos, ends up in a Milan orphanage, which is directed by a strict mother superior. The other children are malicious - the biggest and strongest bully the small, weak ones.

Lewinsky has devised a twisting, cruel fate for his main character, taking him across Europe to the vast expanses of Russia. The protagonist is driven by an unquenchable yearning and desire to get to the bottom of his parentage and identity.

When he is twelve, the mother superior places Louis in the care of an old marquis, whose inheritance she is eagerly anticipating. The old man’s desire to use the services of a young boy creates a sense of foreboding. As things turn out, however, the marquis is neither a paedophile nor a sadist, but becomes the untutored boy’s strict teacher. Asked what he is good at, Louis replies: “Nothing.“ “That’s a good start …  A blank page is good to write on“, the old man replies. Louis absorbs the marquis’ knowledge and wisdom and his confidence grows. Never again does he want to be a victim.

Upon the marquis’ death, Louis has to return to the orphanage, but before long, he escapes. Times are hard, however, and there are few prospects for someone like him. So he enlists in the Napoleonic army and takes part in the Russian campaign, which ends in catastrophe. He returns with a badly injured right hand. He is tired of life and wants to end it all. But the pharmacist to whom Louis goes to buy poison arouses his desire to discover who his parents are after all.

This quest takes him to Reichenau in Grisons, Switzerland. He finds out that his mother had been a cook there and that her name was Marianne Banzori. And that one of the local teachers was called Chabos. Louis meets Aloys Jost, the former headmaster, who knows where his mother is, but advises him not to visit her. He also claims to know who Louis’ father is, but has sworn not to reveal his identity.

Jost, meanwhile a wine merchant, becomes the orphan’s second benefactor. Louis settles down, becomes a respected citizen within the community, and starts a family. Against all the odds, he appears to have found happiness, but his niggling secret continues to gnaw at his soul.  Risking everything he has, he travels to Paris after finding out that the “People’s King” Louis-Philippe I, who came to the throne in 1830, had worked as a French teacher in Reichanu while fleeing the revolutionary turmoil and went by the name of Chabos. And he, Louis Chabos, is certain that he is a prince, just like in his childhood dream back at the orphanage.

“All that is known about the son conceived by the Prince of Orléans with the cook Marianne Banzori is that he was born in December 1794 and was taken to an orphanage in Milan. All the rest is invention“ is the lapidary comment on the historical background at the end of the book. Lewinsky has demonstrated once again that he is both a great inventor and an excellent storyteller.