Meret, a passionate nurse, assists with operations on non-conformist women until her love for Sarah makes her doubt the fatal methods. Yael Inokai tells a poetic story about human medical experiments. 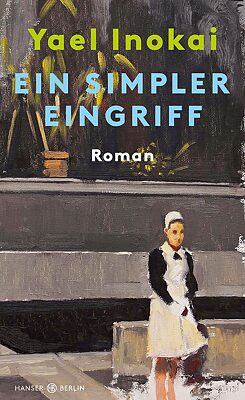 © Hanser Berlin Ein simpler Eingriff (A Simple Procedure) is the title of the third novel by the writer Yael Inokai, a native of Basle who lives in Berlin. The cover, featuring Nurse at a window, an engagingly delicate oil painting by Helena Parada Kim, sets the scene for this procedure in a hospital that performs psychosurgical operations.

Reading this slim volume of just 190 pages, one gradually realises that “simple“ is a rather euphemistic way of describing the procedures performed at this establishment. By means of irreversible operations, women who have become a burden for their environment on account of their uncontrollable angry outbursts are scarred and made to fit in. Of course, there is nothing simple either about the act itself or its impact on the woman concerned.

Meret, the young protagonist, initially refuses to believe that she is party to this at work every day. In a retrospective view of subsequent events on the first page, she says she was driven by the conviction, belief and hope in a new future for the patients. Never striking a violent tone, but always one that is gentle, empathetic and restrained, the novel suggests that her trust in authority and her will to submit to strong structures can be traced back to her childhood with a violent father.

At best, the place and time are implied. A nurses‘ hall of residence on the outskirts of a city, a hospital a cycle ride away – so much and a little more are revealed, but not the particular city, country or time where the intense, distraction-free story of Marianne, Sarah and Meret is set. Each of the book’s sections is headed by one of these three women’s names – and Meret herself tells how the encounter with the other two women helps her to break free from an oppressive, restrictive system.

Marianne is first. She comes from a wealthy, well-established family, which is why she is given preferential treatment at the hospital. Her father, a businessman and patriarch, objects to her “episodes“. “The fury inside her was so great that it exploded, destroying everything around her with wild accusations, screams and acts of violence.“ Meret supports the doctor by distracting and calming the patients. He tries to put Marianne’s mind at rest while at the same time explaining what society expects from the operation: “There is something inside you and I will put it to sleep. It won’t bother you anymore. It will sleep for ever. It’s a simple as that.“ In this case, however, things are not as simple as that after all, and the operation does not go as hoped. Marianne does not regain consciousness, and so that nobody notices anything, she is later no longer to be seen on family photographs. That’s how obliteration works. The doctor is sorry, but says “the setbacks will pay off in the end. They are the logical price of progress.“ But Meret was very attached to Marianne from the beginning and has reached a point of no return: ”When I said these words softly to myself in the room with Marianne, they took me right back to the abyss. I was silent.“

Meret’s ultimate transformation from silence to resistance is mainly due to her love for Sarah, who is also a nurse in the establishment and initially just Meret’s roommate. During the second section, Sarah and Meret become lovers. With intense poignancy, Yael Inokai describes how they become close and discover one another. Sarah, by refusing to simply accept everything, asking critical questions and making critical remarks, ultimately enables Meret to question her obedience and her conformity. She recognises her complicity and also the danger in which they both find themselves within the logic of this system: ”Wouldn’t they say the same of the two of us as well? That it’s a mental disorder?“ Indeed, the doctor has already dropped a hint to Meret that people knew about her and Sarah – and that something could be done about “inclinations that people should not have“.

In the end, Meret’s doubts, growing distance and self-knowledge, and the confidence her love for Sarah gives her, gain the upper hand and the two women manage to break out. Miraculously, Marianne also makes a comeback. So Yael Inokai‘s “quiet dystopia“, as Gregor Dotzauer describes the novel in his Laudatio to the author when she was presented with the Anna Seghers Prize in June 2022, has a happy ending after all. This impressive poetic study of quiet but irreversible emancipation, fostered by solidarity, love and empathy, made it onto the longlist for the German Book Prize 2022. The novel deserves further success.