New children’s books tell some crazy and comical stories, others are populated with dangerous gangsters, ghosts and AI. 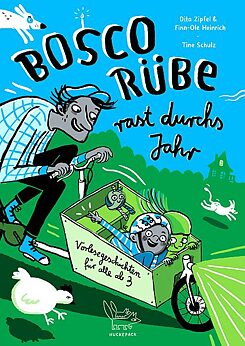 © Huckepack im mairisch Verlag Bosco Rübe rast durchs Jahr (Bosco Rübe Races through the Year) by Dita Zipfel and Finn-Ole Heinrich is the story of a little boy’s daily life told in scenes from the Rübe family in the city of Berlin and from his day care centre. Bosco is an unusually creative three-year-old but his parents can handle it. In this comical and crazy read-aloud book, illustrator Tine Schulz’s colourful drawings vivaciously underline each of the scenes. In the Süddeutsche Zeitung, Christine Knödler concludes that this children’s book is also enchanting for adults due to its play with words. For example, Blätterkrokant (nut brittle) becomes Kletterbrokant, a word that “comprises the preciousness of brocade, the deliciousness of brittle, the magic of storytelling and the enchantment of books like this one.” 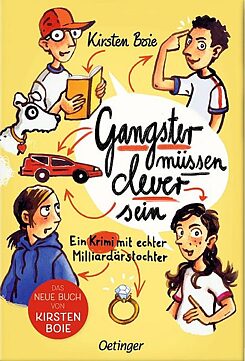 © Oetinger In Gangster müssen clever sein. Ein Krimi mit echter Milliardärstochter (Gangsters Need Cunning: A Thriller with a Real Billionaire’s Daughter), the new children’s book by Kirsten Boie, Jamie-Lee and Valentin take turns telling the story of how they and their friends Mesut and Fee solve the break-in at Fee’s house. As always with Kirsten Boie, the story is suspenseful, peppered with good portrayals of children and realistic everyday life. According to Kirsten Kumschlies of kinderundjugendmedien.de, Boie has succeeded in creating another “children’s literary masterpiece” noting that “She still manages to observe and mirror modern-day childhood – when she employs clichés and stereotypes, it only serves the exuberant comedy that carries the plot.” 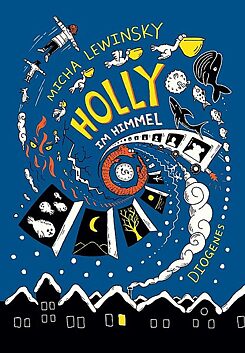 © Diogenes “An announcement clangs from the loudspeaker: Attention, all newly deceased on Line 8 and 18 please proceed to Station D. Your bus will be leaving in a few minutes.” Holly has been run over in the street and has landed in the intermediate realm of heaven. The girl makes a friend who helps her understand what is happening as all the deceased are bussed to rooms in which they find the life they always wanted for all eternity. Holly, however, wants to go back to her family for a proper goodbye. This is only possible if one is an angel who has attended angel school, because the angels in heaven are ruled by a dictator. The dramatic part of the plot begins with some satirical references to present-day problems on earth. Using a kind of literary montage technique, Micha Lewinsky switches back and forth between heaven and earth in Holly im Himmel (Holly in Heaven) with some comic interludes until the happy ending is reached with the help of an angelic resistance group. Despite the gravity of the subject, the story is told “with slapstick and humour, with suspense and surprise,” writes Roswitha Budeus-Budde in the Süddeutsche Zeitung. 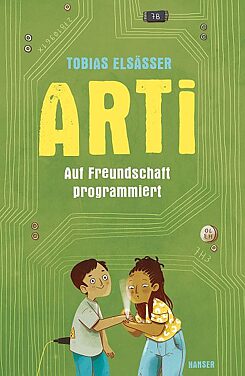 © Hanser Jessy witnessed the internet simply shutting down in a big crash. Now everyone is allotted a fixed, strictly guarded quota of online time in this high-tech world. Life is determined by electrical household appliances programmed to control everything and report to their manufacturing companies. When Jessy is given an android as a present for her 11th birthday, which, at her mother’s request, always accompanies and watches her everywhere, it soon becomes her companion. Contrary to its programming, the android develops human feelings putting it is in great danger of being switched off. Arti – Auf Freundschaft programmiert (Arti – Programmed for Friendship) by Tobias Elsässer is a cleverly told and exciting story about the possibilities of artificial intelligence. 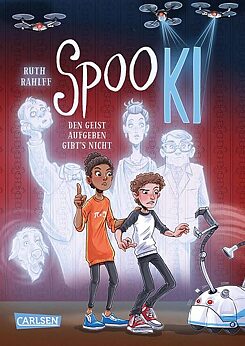 © Carlsen His family – father, mother, dog and cranky grandfather – are amiable ghosts. But Robert is a human who was taken in by them as a baby. The clash with real school life and the daily life of the fantasy family brings about a lot of funny situations, but also the risks that the ghost family will be discovered. The social worker is already observing who and what these parents are. Fortunately, Robert’s new schoolmate is an expert in computer technology and thus a great help. Ruth Rahlff’s book SpooKI. Den Geist aufgeben gibt’s nicht (SpooKI: No Giving Up the Ghost) is an unusually funny and exciting ghost story that also deals with artificial intelligence, as the title suggests. “It’s even a draw for boys who hate reading,” writes Lena Bodewein at NDR.