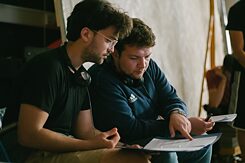 © Arkadij Khaet and Mickey Paatzsch Arkadij Khaet and Mickey Paatzsch were born in 1991. They met while studying film at the Macromedia Academy in Cologne and have been writing screenplays as well as directing together ever since. Their short films were presented at more than 150 film festivals across the world and won numerous awards, including the German Human Rights Award, which honors movies that deal with human rights in an extraordinary way, in 2016.

Arkadij Khaet was born in 1991 in the Republic of Moldova during the final moments of the Soviet Union. A few weeks after his birth his family immigrated to Germany. After graduating from high school, he lived in Israel for a while, and then moved to Cologne to start his undergraduate studies in film and television, writing and directing his own film projects and often collaborating with Mickey Paatzsch. Since 2016, he has been studying film directing at the Filmakademie Baden-Württemberg. His short films, including Scheideweg (2017) and Masel Tov Cocktail(2020), have been shown at film festivals worldwide and have won many awards. His filmography also includes the shorts Alina In Wonderland (2019), Userdate (2018), Hikikomori (2017), Ablicht (2017), and Through the Curtain (2016).

Mickey Paatzsch studied directing at the Macromedia University of Applied Sciences Cologne and Philosophy at the University of Cologne. He worked as a freelance filmmaker and directed several short films, often together with Arkadij Khaet. In his films he tries to portray misfits and their habitats in a fun and creative way. His short films include the immensely successful Masel Tov Cocktail (2020), Alina In Wonderland (2019), The Last Day of Summer (2018), Cecilia’s Dream (2018), Hikikomori (2017), The Woods (2016), and Karl Was Here (2014).