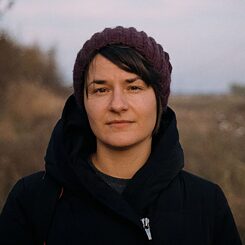 © Borbála Nagy Borbála Nagy was born and raised in a family of dancers in Hungary. After pursuing a degree in film studies and working as a journalist in Budapest, she left her home country in 2011 for personal and political reasons. She started her studies in directing at the German Film and Television Academy Berlin (DFFB) in 2012. Her shorts were shown at international festivals worldwide. Her 2018 film Everything Alright (Minden Rendben) was nominated for the German Short Film Award and the German Film Critics Award. Nagy’s latest short film Land of Glory (2020) won the German Short Film Award. At the moment she is developing her first feature, Nothing to See Here. Her filmography includes Cross-Country Drive (Auf Überlandfahrt) and Somewhere Else (Irgendwo Anders).