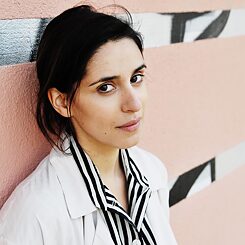 © Tondowski Films Maryam Zaree was born in Tehran in 1983. She grew up in Frankfurt/Main and studied acting at the Film University Babelsberg. Most recently, she appeared in the series 4 Blocks, Christian Petzold’s films Transit and Undine, and as a guest actor in various plays. She also works as a theater author and director. In 2017, her play Kluge Gefühle won the dramatists’ award at the Heidelberger Stückemarkt; in 2018, she was awarded the Grimme Prize for her performance in the series 4 Blocks. Born in Evin is her first film.