Monuments in the public space in Brazil continue to promote the image of a patriarchal and racist country characterised by white settlers in which women and Indigenous ethnic groups do not exist. The debate surrounding the statue of conqueror Borba Gato, which was recently set on fire in São Paulo, has led to long and heated discussions in society.

At the end of July 2021, the image of a huge statue in São Paulo going up in flames was going around on social media, attracting interest not just in Brazil but all over the world. According to the group Revolução Periférica, which took responsibility for this campaign, the objective was to use the example of Borba Gato, the bandeirante (conqueror, slave trader, adventurer) to spark a discussion about the way controversial figures are commemorated in the public space. “The campaign was successful because it triggered reactions from both camps: agreement as well as rejection. Furthermore the row caused Brazilian society to become aware of the need to reconsider some of the monuments in our cities,” says author Abílio Ferreira, who has been an active member of the Black Movement of Brazil since the 1980s.


The controversy surrounding the statue erected in 1963 in honour of Manuel de Borba Gato, who came from São Paulo and is believed to have lived from 1649 to 1718, is nothing new. In 2015 the thirteen-metre sculpture had red paint poured over it, and the plinth was defaced with the words “Bandeirante ruralista assassin” (Bandeirante, ruralist, murderer). “The idealised image of the bandeirante who set out in the 16th century to bring civilisation to the most remote corners of Brazil has been used increasingly since the middle of the 20th century,” relates historian Ana Rita Uhle of the Universidade Federal da Integração Latino‑Americana (Unila), whose dissertation focuses on the relationship between art and history on the basis of monuments from 1915 to 1963. São Paulo’s elite in those days chose the former conquerors and discoverers – using the new description “bandeirantes“ – as a symbol for the national development model of the time, according to Uhle. “By the end of the 20th century this romanticised image was becoming shaky with the emergence of a new view of the colonial era. From then onwards people started to hold the bandeirantes responsible for things like deportation of Indigenous groups and persecution of enslaved Black people as well.”

A Lack of Representation 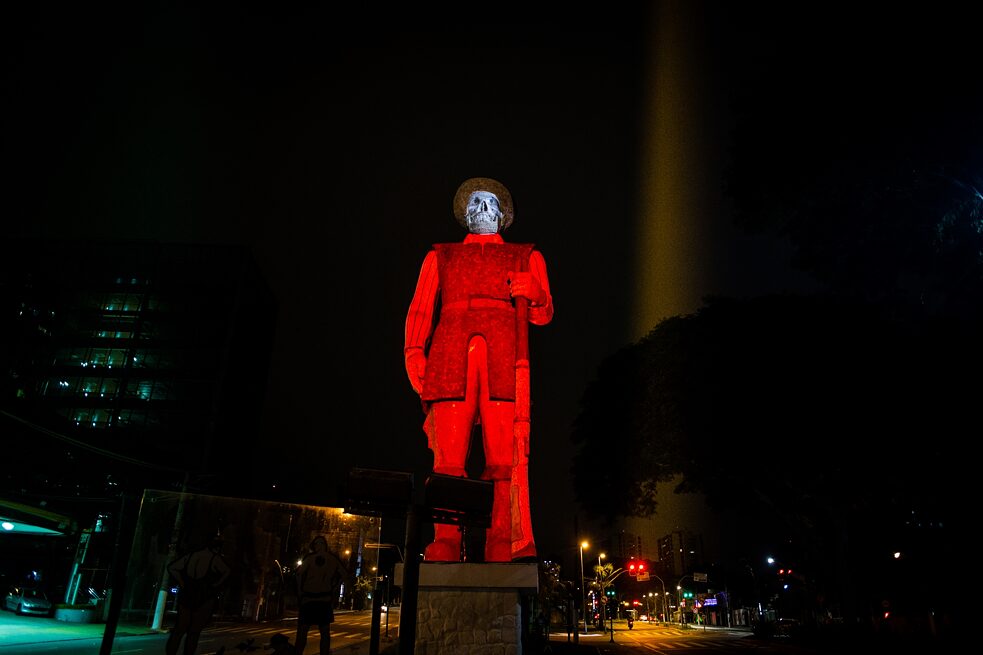 Installation by the Coletivo Coletores art collective at the Borba Gato statue in São Paulo, which has now been destroyed by fire | © Toni Bapstiste / Coletivo Coletores The burning of the statue of Borba Gato fits in with more recent history, which was brought into the public eye with the murder of George Floyd in 2020 in the USA. The wave of anti-racist demonstrations that spread across the whole world focused on police violence and controversial monuments to figures from the colonial era.

“However the phenomenon is not new,” Uhle says. “It’s only recently that we have been reminded of the beheading of the statue of Spanish colonist Diego de Mazariegos in Mexico in 1992 by a group of Indigenous leaders.” 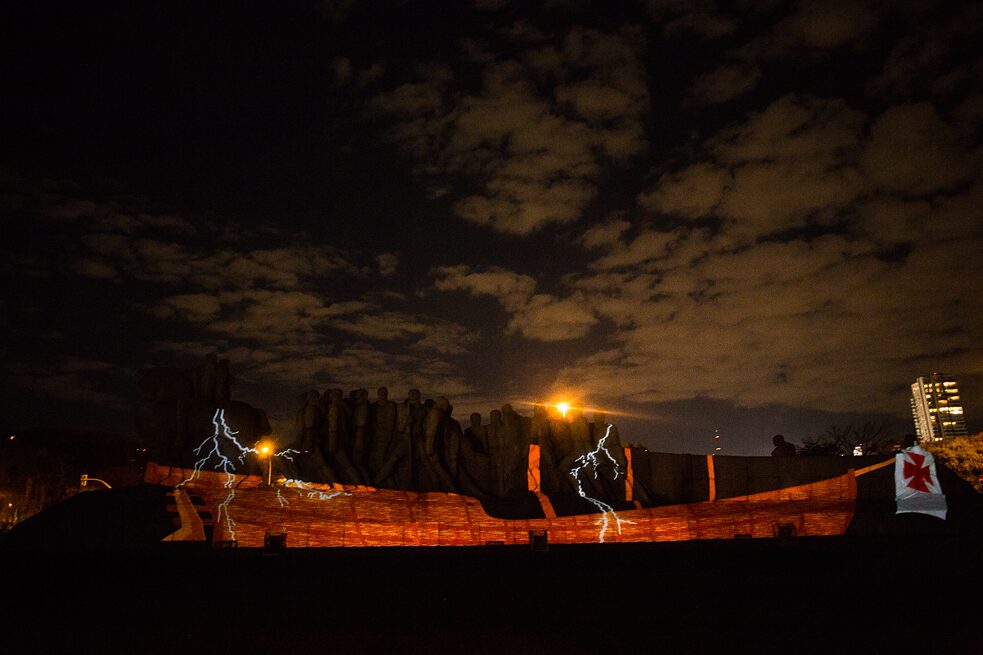 “Brasil Terra Indígena” (Brazil, Indigenous Land) - projections on the monument Monumento às Bandeiras by modernist Victor Brecheret in São Paulo, a controversial homage to the subjugation of Indigenous people by bandeirantes. It is a collaboration of the art collective Coletivo Coletores and the Indigenous artist Denilson Baniwa as part of the 2020 project “Vozes contra o racismo: outras narrativas sobre o território paulista” (Voices against racism: other narratives about the territory of São Paulo) organised by the city of São Paulo. | © Toni Bapstiste / Coletivo Coletores Borba Gato is not the only controversial figure to be commemorated by a monument in São Paulo. According to a survey by the municipal culture authority, there are around 40 monuments to proponents of the slavery that prevailed in Brazil for 300 years, or the military dictatorship from 1964 to 1985. Furthermore there is still a major imbalance in the representation of the people commemorated. So far a study carried out in São Paulo has counted 200 monuments featuring human statues, of which 169 depict men and 137 are white people. Of just 24 women honoured, 18 of them are white and only a single one is Black.

“Slavery continues to be an open wound in our society. The controversial statues should be removed and relocated to memorial sites, where they are set in an appropriate context.”

Less than one month after the Borba Gato statue fire, the city announced the erection of five monuments to Black figures by the start of 2022 – for instance in honour of female author Carolina Maria de Jesus, or Adhemar Ferreira da Silva, an Olympic medallist in men’s athletics. If this actually happens, it would mean that five per cent of all monuments in São Paulo were dedicated to Black people.

“This imbalance shows that the public remembrance culture in São Paulo promotes the image of a city that’s white, patriarchal and racist with a colonial ethos, emphasises social status and keeps quiet about women and Indigenous ethnic groups,” confirms Cássia Caneco, one of the study’s curators. “I view the Borba Gato statue fire as a cry for help. People of African or Indigenous heritage who have a problem with the statue have already been trying to initiate dialogue with the municipal bodies for a long time, but barely anything has really happened,” says Caneco.

The situation is no different in other Brazilian cities, says historian Carlos da Silva Jr. from the Universidade Estadual Feira de Santana in Bahia State, who is also President of the Brazilian Association of African Studies. In 2020 he collaborated with a group of researchers to create the project Salvador Escravista, which maps controversial statues and monuments in the state capital in order to make amends. “ 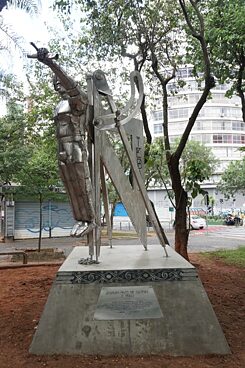 The Tebas statue, inaugurated in 2020, a monument to Joaquim Pinto de Oliveira Thebas, known as Tebas, in São Paulo. Tebas (1721-1811) was a Brazilian engineer, architect and stonemason who was probably held as a slave until the age of 58 by Portuguese settlers in Brazil and possibly by the Catholic Church as well. | © Marcel Farias ​Although the majority of the city’s population is Black, unfortunately people like Joaquim Pereira Marinho from Portugal – who sold slaves and had them deported to Brazil in the 19th century – are still commemorated in the public space,” explains Silva.

According to the historian, it’s high time that Brazil founded some museums about the era of slavery: “Slavery continues to be an open wound in our society. The controversial statues should be removed and relocated to memorial sites, where they are set in an appropriate context.”

“Removing controversial statues and erecting monuments to make amends must be accompanied by information about the motives in each situation. Otherwise the discussion cannot progress,” says Abílio Ferreir, author of the book Tebas: um negro arquiteto na São Paulo escravocrata (2019) about Black architect Joaquim Pinto de Oliveira, who as the creator of numerous buildings in the 18th century was not commemorated with a statue in São Paulo city centre until 2020.

In 2020 the monument to Borba Gato was the focus of a project entitled Monumento para Quem? (Monument to whom?), which was part of the Jornada do Patrimônio (Heritage Day) celebrations organised by the city authority of São Paulo and included participants such as artist Kelly Carvalho, Indigenous artist Denilson Baniwa and multidisciplinary artists Toni Baptiste and Flávio Camargo from the Coletivo Coletores group. With the work Pujança Editada (Edited Power), the duo from the Coletivo Coletores group turned the statue into a projection screen for victims of the dictatorship and police violence since colonial times and up to the present day.

“Art has a transformative power, but in this recent fire we aren’t seeing anything more radical than what’s already happening in Brazil on a day-to-day basis, where the population is suffering because of unemployment and hunger,” says Toni Baptiste. “Not to mention the COVID-19 deaths, which number almost 600,000,” adds Flávio Camargo. “There’s a selective outrage in our country, whereby more people get upset about the burning of a statue than the recent fire at the Brazilian film archive.”