There are scholarship holders who travel in a rather unusual, almost mysterious way. They travel inconspicuously from country to country in a hardside suitcase by post. In the summer of 2020, the Goethe-Institut sent two of these residency artists on an exploratory tour through Europe. Despite Covid-19, they cross borders unhindered and guest in a different city each month. On arrival, they may first have to be freed from their bubble wrap, lifted out of their suitcases and switched on, but then they enter into an immensely interesting dialogue with their outside world - beyond a purely human understanding.

We're referring to GAIA and NaoMi, two robot ladies who are to illustrate the relationship between humans and machines in a variety of cultural contexts as part of Robots-in-Residence. They got their names in Rome and Budapest. GAIA stands for “Generazione Algoritmo Intelligenza Artificiale” - “Generation Algorithm Artificial Intelligence”. NaoMI is derived from the model name of the robot. The dark grey, approx. 60 cm tall and slightly more than 5 kg heavy NAO 6 is now the sixth generation of the interactive humanoid robot NAO, developed by the Japanese-French company SoftBank Robotics. It is in use worldwide and serves primarily as a research object for educational institutions. Its 25 degrees of movement make communication with NAO seem particularly natural. The robot has various sensors as well as modules for speech, object and face recognition and speaks several languages 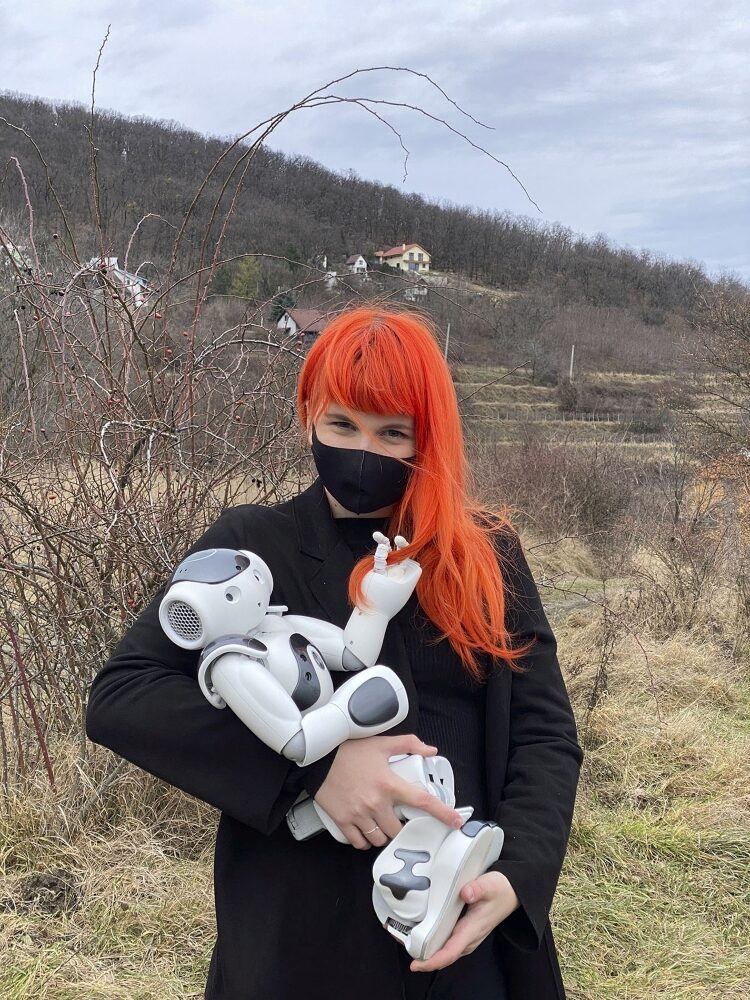 NaoMI in Bratislava with the artist Emma Záhradníková | © Goethe-Institut As part of the Robots-in-Residence programme, two of these NAO robots travel to various institutes abroad, mainly in Europe. There, they are supervised and further programmed by coders and artists, taking local issues and circumstances into account. The learning progress - especially concerning their interaction with humans - depends to a large extent on the teams working with GAIA and NaoMI. A key component of the programme is the exchange between the different European teams. The programme thus serves not only to reflect on the relationship between humans and robots, but to foster an interdisciplinary and transnational dialogue as well. “Thanks to the robots, people [ultimately] come closer to each other,” is how Professor Wieslaw Kopec from Warsaw sums things up. The special attraction for the local teams is that they can work with the robots independently at home, in their research institution or at the Goethe-Institut - and for a period of four to six weeks. 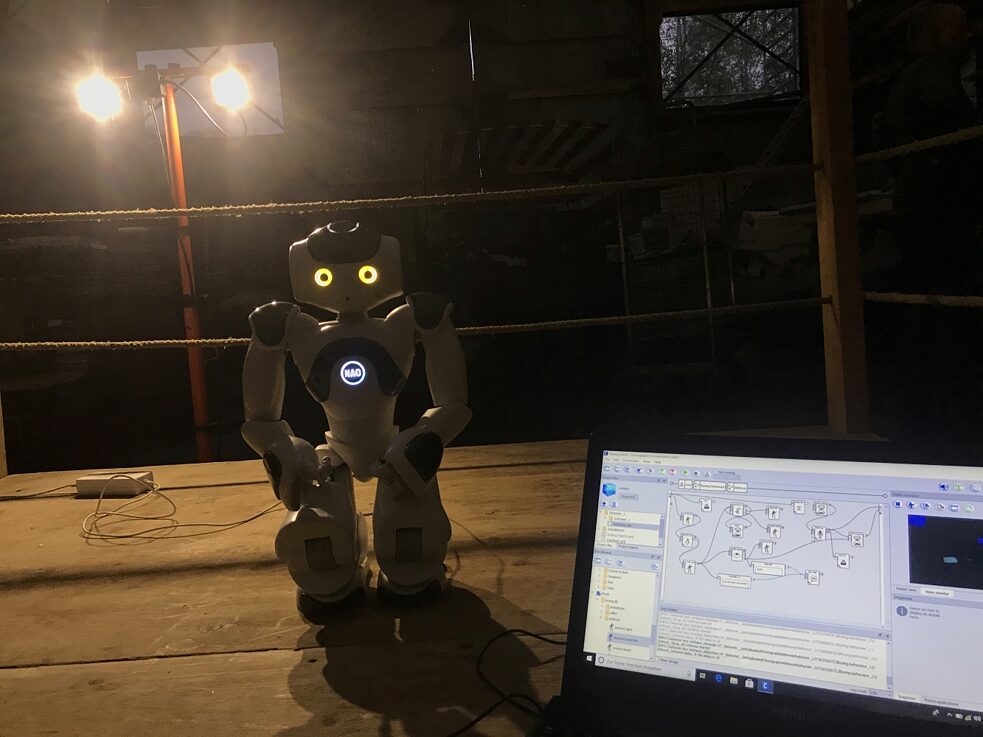 GAIA in the punching ring in Groningen, Netherlands | © Floris Maathuis The robots then carry their newly acquired knowledge and skills further afield, picking up more and more aspects that, taken together, can capture and spark a multifaceted debate on artificial intelligence. For Milan-based philosopher Zoe Romano, who is taking part in the programme, the unusual residency programme even raises the hope that the two robots will “pass through the hands of many programmers and artists, to learn from everyone and perhaps end up discriminating against no one.” 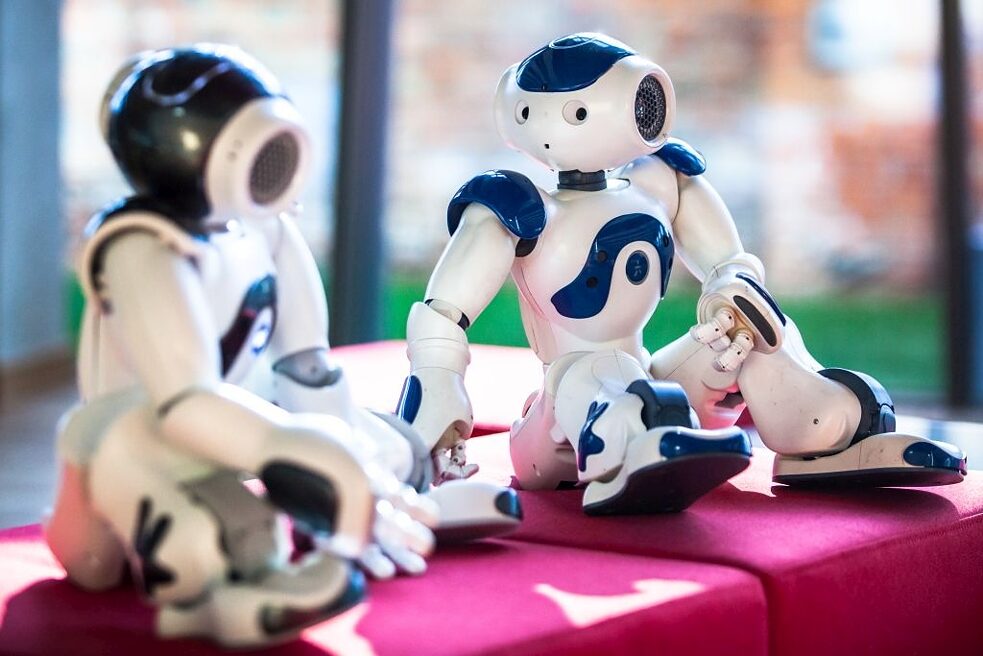 NaoMI in the Goethe-Institut Warsaw | © Goethe-Institut / Adam Burakowski The projects and performances realised with the NAOs can reduce fear of contact, reflect the current state of robotics and dismantle stereotypes taken from pop culture about autonomous entities with their own consciousness. So-called “social” robots like GAIA and NaoMI are built to look like social interaction partners through their appearance, movement patterns and linguistic responses, but they were not meant to be misunderstood as “conspecifics”, i.e. members of our species. Even simple tasks such as grasping and setting down objects are still difficult for them, but robotics is constantly developing. In the future, humanoid robots will support humans in their everyday lives, alleviate their loneliness and take on repetitive and physically demanding tasks. Society has long dreamt of mechanical helpers to perform these and similar tasks. These helpers have been imagined in human form from the very beginning. The term “robot” was born only 100 years before GAIA and NaoMI embarked on their journey. Czech author Karel Čapek coined the term in 1920, derived from the West Slavic “robota” - meaning “work” or “drudgery”.

As human-like machines continue to be developed, the cultural context in which they operate will play an increasingly important role. “Social” robotics requires cultural expertise that engineers and coders do not necessarily have. The collaboration of philosophers, artists and developers is a very promising approach here, as is a playful approach to a topic that is absolutely crucial for the future.

NaoMI and GAIA will travel through Europe and beyond from June 2020 to September 2021. The following stops are planned for 2021: Bucharest, Riga, Skopje, Dublin, Lyon, Tashkent, Kyiv, Copenhagen, and Rotterdam. In October 2021, the robot ladies will be evaluated by the RoboticLab of TH Wildau and their abilities analysed before they leave for Dresden in November - for the concluding festival of “Generation A=Algorithm” at the German Hygiene Museum.