Fears
No Escape from Bureaucracy

Halfdan Pisket does not want to comment on his picture. 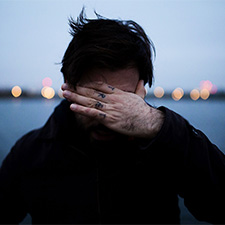 He graduated from the Royal Danish Academy of Fine Arts and has written and designed a series of underground comics.

Furthermore Halfdan Pisket has published a graphic novel trilogy consisting of "Deserter" (2014), "Cockroach" (2015) and "Dane" (2016), a work for which he received the National Arts Foundation three-year work grant.