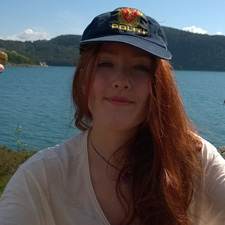 Ida Eva Neverdahl | Photo: © Ida Eva Neverdahl Ida Eva Neverdahl is a 23-year-old comic artist from Stavanger, Norway. Ever since she was a child, she has loved telling stories through her drawings and texts. At 11 she began drawing cartoons about her cat and has since turned her passion into a profession.

Neverdalh’s first book, Moskva (Jippi Forlag, 2013), was published together with Øystein Runde and has been translated into English and Polish. Moskva takes a satirical look at contemporary Russia and President Putin. In 2016 she published her second book called Gelé, a collection of shorter cartoon series produced between 2012 and 2016. She draws cartoon series for the big Norwegian newspapers VG and Dagbladet. Her drawings have also attracted international attention. The renowned American comic artist and researcher Scott McCloud, for instance, has used her drawings for his lectures.

Ida Eva Neverdahl likes drawing on topics or individuals that currently interest or concern her. Her art also deals with mental illnesses. Besides her passion for drawing, she studies medicine and loves jogging and practicing martial arts.